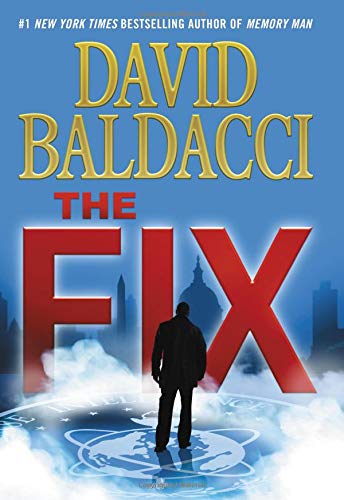 “Those readers thinking they can outguess the author will find their abilities tested . . . ”

On an early morning in Washington, DC, a horrific scene is played out directly in front of what should have been one of the safest places on earth. Across the street from the J. Edgar Hoover Building, a man shoots a woman, then kills himself.

As far as the authorities can tell, the two were strangers. It seems a random murder followed by suicide and eventually the case would’ve been closed as such, except for two very important points:

The man had several classified government contracts, and Amos Decker witnessed the deaths.

Left with synesthesia after a traumatic head injury during his days as an NFL player, Decker also is stricken with perfect recall. He considers neither anything but a curse, for the two afflictions not only changed his personality but also his outlook on life, even as they make him the ultimate investigative agent. Called the “man who can’t forget,” Decker goes through life remembering everything, and at the top of the list are the murders of his wife and daughter two years before, continuing to haunt him every day of his life.

It’s because he can’t forget that Decker comes to believe Walter Dabney didn’t simply choose Anne Berkshire, a complete stranger, as his partner in death. There has to be something more. At this point, he simply isn’t certain what that something is.

Meeting Dabney’s widow and his daughters doesn’t help. They, as well as his co-workers, say everyone liked Walter. He was a good guy, an American success story. To the cynic, that means the dead man undoubtedly had enemies. The problem is Walter Dabney was a good guy, and there’s nothing to prove otherwise . . . until Harper Brown enters the scene.

The agent of the Defense Intelligence Agency orders Decker to back off and leave the investigation to her agency—which makes him more determined to continue. A couple of attempts on his life go a long way to persuading Harper to join forces instead of shouldering him aside.

Soon Brown, Decker, and his team are mired in contradictions and more confusion about Walter Dabney and his relationship with Berkshire, a substitute teacher who lived in a million dollar condo, drove a luxury car, and doesn’t seem to have existed prior to ten years ago.

All Decker has is his infallible memory, replaying the scene before the FBI building again and again, like a slide show viewing each picture, seeking that one detail giving him the answer overlaid as they are with the memory of his own loss. He sympathizes with Dabney’s family even as he considers them suspects, however far-fetched that may be.

All Decker has as a clue is a statement made by both the victim and her killer to different people: That one can know someone a long, long time and suddenly discover he doesn’t know him at all.

He’s certain if he can discover the identity of the persons they spoke of, he’ll find the catalyst for the crime.

His discovery of why Walter Dabney killed Anne Berkshire and then chose to take his own life is a shocking revelation of the act of a loving husband, father, and a thoroughly honorable man.

In a convolution of twists and turns, with the reason for the tragedy always remaining just out of reach, David Baldacci has written another thoroughly entertaining entry in this thriller series. Engaging characters and the use of the protagonist’s affliction create an imaginative if sympathetic effect. The end will come as a surprise. Those readers thinking they can outguess the author will find their abilities tested as they follow Amos Decker to the surprising conclusion of The Fix.