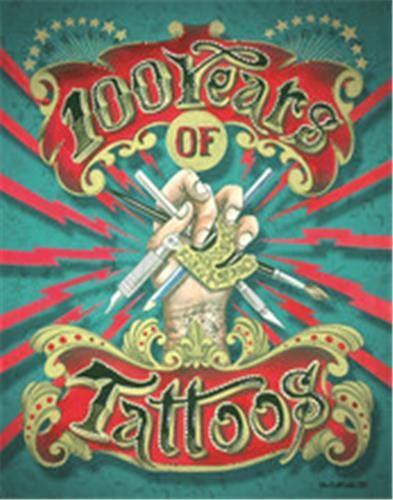 This book is filled with colorful characters and photographs in a pictorial history of tattoos. The book is broken into sections by decade and further packaged into various cultural phenomena such as prison tattoos and tattoos during war.

McComb examines the different statements made by tattoos and provides amazing examples in the photographs. The history of tattoos, much like fashion, has waxed and waned, with different styles coming in and out of popularity, from Sailor Jerry to modern art.

McComb has bitten off a large chunk of cultural history by examining a century of tattoos, mostly in the Western world. The United States is his prevalent interest, but there are detours to Australia, Great Britain, and Japan. The history of tattoos is really too large to be contained in this lovely volume, and it would’ve been best to focus just on the United States.

The United States’ initial fascination with tattoos was negligible in the early 1900s. Inked men and women were few in number, starting with sailors and soldiers and the occasional sideshow woman. It became common for men in WWII to sport ink from their time served; however, the interest in tattoos waned considerably when images of concentration camp survivors showed their crudely done identification numbers permanently etched into their skin.

Examples of flash art and different artists’ styles are interspersed with the decades this book examines, along with photographs of people being tattooed or their tattoos. Each photograph is captioned, sometimes with explanation of the importance of the tattoo on display or the idea behind tattooed people of the specific generation being explored.

The book’s sections contain introductory material explicating the current cultural environment of the United States (or the generalized Western world) and how tattoos came back into fashion or were altered (whether by art movements, into political statements, or something else).

As beautiful as this book is, and as useful as it could be, this book fails in a major way: There is no scholarly material to back up any of the claims. While there is some information that can be taken for fact just based on the pictures provided, most of the information McComb is looking to provide is not common knowledge.

McComb provides picture credits but no supporting evidence for his claims about Albert, Prince of Wales, having a tattoo (a common myth) or that other royalty or celebrities from the late 1800s–1950s were inked. McComb tosses out general statements that laypeople unfamiliar with research or who take the written word as fact will swallow without question. This is a major problem, and if McComb turns out to be accurate and did due diligence, then an amendment or website to his sources is a good start. It would be ideal, however, had he included footnotes or endnotes to his various claims.

It’s a further shame that McComb’s introduction to tattooing doesn’t mention the use of Edison’s perforating pen that was adapted by tattooist Martin Hildebrandt—a major contribution to the art form and variations of this pen are used today. McComb generalizes information and for the most part the focus of this book is on men with the exceptions of the pin-up woman, celebrity, or sideshow, which will make this book unappealing to the female tattooed reader who doesn’t fit into any of those categories—she will find herself and her voice missing.

This would make a good coffee table book in hardcover format or a nice gift to a tattoo aficionado or artist with the caveat that the information included must be taken with a grain of salt—though much of it rings true.