The Last Goodnight: A World War II Story of Espionage, Adventure, and Betrayal 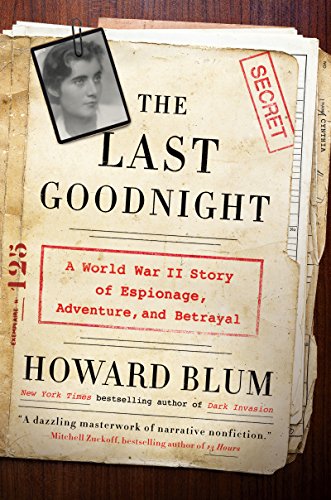 In 1930, 18-year-old Betty Thorpe married British diplomat Arthur Pack and left Washington, DC, for Chile where Pack was commissioned. But Betty had bigger ideas than being an embassy spouse and in just a few years transformed into Cynthia, a secret agent for British Intelligence at the beginning of WWII and the woman General Donovan of the OSS called “an unsung hero of WWII.” Her international exploits are detailed by bestselling author Howard Blum in The Last Goodnight.

Even before Betty was in the spy game, she cultivated numerous masks in all areas of her life. She had a need to break conventions and escape from what she considered an oppressive existence as a wife and mother. Mrs. Pack didn’t defer to any man, including her husband, and she was unapologetic about her voracious sex life, whether it was in the line of duty or for more purely personal reasons.

Betty apprenticed her spy techniques on her own and built an impressive dossier for the world of espionage, eventually recruited by British Intel to report on diplomats in Madrid during the Spanish Civil War.  She even rescued her husband, who was caught in the diplomatic cross-fire behind enemy lines, using her leverage via the coincidental affair she was having with a connected politico who signed off on Arthur’s release.

But once Betty got Arthur safely to France, she returned to the warzone to save her lover Carlos Sarorious under the cover of volunteering to deliver medical supplies and go on ambulance runs for field hospitals.

Her spy star was rising so much that British embassy transferred Arthur to Poland in the late 30s so Betty could seduce Polish diplomat Count Michal Lubienski to nab intelligence on what Poland was planning to do with a proposed non-aggression pact with Germany as the Nazis continued to seize power. Pack and Lubienski’s affair was so intense that he trashed his marriage and almost his career; meanwhile his lover was filing daily reports on his activities to senior British agents.

Blum writes a largely unacknowledged episode involving Betty and her groundwork that led to the breaking of the Nazi Enigma machines by government engineers in Poland. British intelligence had already been trying to solve its mysteries without success before Alan Turing and his team ultimately cracked it open.

Betty’s high diplomatic visibility as Pack’s wife, however, led her superiors to pull back on any more sensitive missions in Europe. The Packs were packed off once again to Chile. Betty did not hesitate in launching an alternate game plan, this time becoming a journalist writing under a pseudonym to keep herself in the international game. Fluent in both French and Spanish, Betty had previously been cited by British intel for the exacting style of her daily espionage reports.

Her journalist cover took her back to Washington, where the British set her up as a full-fledged agent spying for them as Cynthia. By that time she was separated from Arthur and their daughter and operating on O Street for what her superiors called “discreet entertaining.” Blum builds this cloak and dagger operation masterfully and you have to beat back the suspicion that that he is not embellishing.

The final chapters are Blum’s riveting account of Cynthia’s mission spying on Charles Brousse, with whom she is carrying on a smoldering affair. Brousse was public relations attaché working in the radioactive Vichy France embassy in DC, right before the U.S. entered WWII and was officially neutral country.

The plot thickens so much in this international espionage that even under Blum’s hands, it gets a bit burlesque. At midnight in the embassy with a triple agent, champagne, a drugged dog, and a duped security guard, Cynthia hangs onto on her plan B that involved an emergency sex scene, with her fate hanging on a string of pearls.

In his introduction Blum acknowledges there might be some piecing together a few circumstantial facts of her commissions, but assures that his research is as thorough as possible—not discounting the fact that for secret agents deception is vital and leaving a trackless trail is a more than just a survival technique.

The Last Goodnight: A World War II Story of Espionage, Adventure and Betrayal is so hot that it has already been optioned to be a major motion picture. Who will have the X factor spy mystique to be Cynthia onscreen? Cate Blanchette? Angelina Jolie? Keira Knightley? It would be easy to imagine Garbo, Dietrich, or Bacall as perfect for this role.