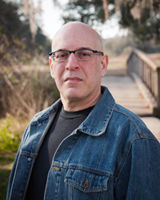 Peter Adam Salomon is a member of the Society of Children’s Book Writers and Illustrators, the Horror Writers Association, the International Thriller Writers, and The Authors Guild and is represented by the Erin Murphy Literary Agency.

His debut novel, Henry Franks was named one of the ten "Books All Young Georgians Should Read" by The Georgia Center for the Book. His second novel, All Those Broken Angels, has been nominated for the 2014 Bram Stoker Award in the Young Adult category.

His short fiction has appeared in the Demonic Visions series, and he was the featured author for Gothic Blue Book III: The Graveyard Edition. He was also selected as one of the Ladies and Gentlemen of Horror for 2014. His poem "Electricity and Language and Me" appeared on BBC Radio 6 performed by The Radiophonic Workshop in December 2013. In addition, he edited the first book of poetry released by the Horror Writers Association, Horror Poetry Showcase Volume 1.

All Those Broken Angels

Carry On: A Novel

In magical books such as Landline and Eleanor & Park, Rainbow Rowell has proven herself to be a writer of exquisite lyricism and heartbreaking characterization.

Katie Cotugno’s 99 Days is about 83 days too long.

Katie Cotugno’s 99 Days is about 83 days too long.