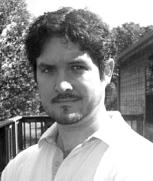 Matt Cardin is a writer, college teacher, and musician living in Central Texas. With a master’s degree in religious studies and a lifetime of personal engagement with religion and philosophy, he writes frequently about the mutual implications of religion, horror, and creativity. He is the author of Divinations of the Deep (2002) and Dark Awakenings (2010), which Publishers Weekly praised as a “thinking-man’s book of the macabre” with “unusual philosophic depth.”

His short fiction, reviews, interviews, and essays have appeared in Icons of Horror and the Supernatural, Encyclopedia of the Vampire, Alone on the Darkside, Cemetery Dance, Lovecraft Annual, The Thomas Ligotti Reader, The New York Review of Science Fiction, and elsewhere. He has also contributed to ABC-CLIO’s online Pop Culture Universe and World Religions database, and is presently editing an encyclopedia for them about mummies in history, religion, and pop culture.

Mr. Cardin founded and edits The Teeming Brain, a blog about the apocalyptic intersection of religion, horror, the paranormal, creativity, consciousness, and culture.

Icons of Horror and the Supernatural [2 volumes]: An Encyclopedia of Our Worst Nightmares (Greenwood Icons)

Encyclopedia of the Vampire: The Living Dead in Myth, Legend, and Popular Culture

The Children of Cthulhu: Stories

In Pieces: An Anthology of Fragmentary Writing

Alone on the Darkside: Echoes From Shadows of Horror (Darkside # 5)

The Joyous Cosmology: Adventures in the Chemistry of Consciousness

Supernatural: Writings on an Unknown History

With the publication of Supernatural, Richard Smoley extends his appeal and considerable expertise in in the areas of alternative, esoteric, and occult Western religion and philosophy to a

“As a reference work that’s firmly rooted in and actively devoted to expressing the current state of academic scholarship about its area, The Encyclopedia of the Gothic [is] quite