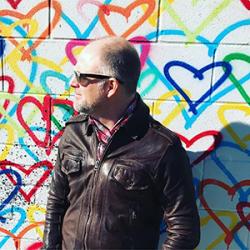 John Copenhaver’s debut historical crime novel is Dodging and Burning: A Mystery (Pegasus Books, 2018). He has been awarded an Artist Fellowship from the D.C. Commission on the Arts and Humanities for four consecutive years. He maintains an LGBTQ crime fiction column for Lambda Literary called “Blacklight.” He won the 2015 Larry Neal Writers’ award for short fiction and was first runner-up in the F. Scott Fitzgerald Short Story Contest and the Narrative Magazine Winter Story Contest.

His work has appeared in Lit Hub, Electric Lit, PANK, Glitterwolf, and others.

He is Lambda Literary Fellow, a VCCA fellow, and a Ragdale resident. He received his MFA in fiction from George Mason. He chairs the 7–12 English Department at Flint Hill School in Oakton, VA.

He lives with his husband and two insanely photogenic dogs in Washington, DC.

Dodging and Burning: A Mystery

The trope of the murdered “dead girl” serves as a catalyst for many popular crime narratives, from bestselling thrillers to limited TV series to true crime podcasts.