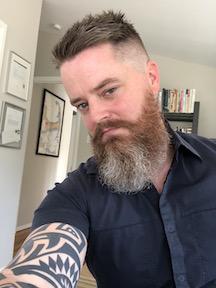 Frederick Speers is the author of So Far Afield (Nomadic Press 2017), a finalist for the Lambda Literary Award for Gay Poetry. Mr. Speers is a former Thoreau Fellow at the Vermont Studio Center, and his poems appear in AGNI; Salamander Magazine; The Drum; The Straddler; Ofi Press Magazine; Diode Poetry Journal; Forklift, Ohio; and Visible Binary.

A graduate of Boston University’s Creative Writing Program, he has since worked as a professional editor and content strategist for two decades, for both high-tech companies and academic publishers, including Oxford University Press, where he published, among other books, the second edition of Oxford’s Anthology of Modern and Contemporary American Poetry (Volumes 1 and 2), winner of the 2015 New York Book Show Award in School Publishing.

He lives in Denver, Colorado with his husband and their two dogs.

“In that larger tradition of transcendent art, if we let them into our hearts, these new poems from Jericho Brown will awe and unsettle us.”

Ilya Kaminsky’s second book of poetry, Deaf Republic, contains some of the most exquisite lines you’ll find in contemporary poetry, lines that vibrate with soft-spoken yet urgent, ethical

“this thoughtfully selected span of Gunn’s poetry is not only an immensely pleasurable read but also a master-class in poetic form.”

If You Have to Go: Poems

Katie Ford’s fourth book, If You Have to Go is full of wounded, distrustful, deeply inward yet insistent verse that, from the very first line of the first poem, seems to push readers away—