Zoobiquity: What Animals Can Teach Us About Health and the Science of Healing 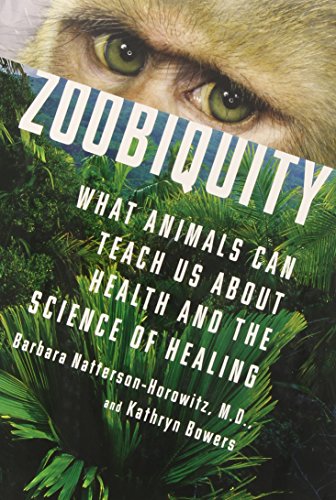 “. . . a very credible argument for collaboration between disciplines . . . entertaining and beautifully written . . .”

This is an ambitious work. Not only has Barbara Natterson-Horowitz presented a very credible argument for collaboration between disciplines, but she has done so in a most entertaining and beautifully written manner.

Dr. Natterson-Horowitz is both a cardiologist and a psychiatrist, thus she has already made the “mind/body connection.” What better person to connect the dots with another discipline in hopes of broadening the science of healing?

The authors point out similarities and differences between the human race and the animal kingdom and carefully illustrate what we can learn by being open to the study of animal physiology and behavior. Kathryn Bowers, a science journalist, collaborated with Dr. Natterson-Horowitz on this work. Together, they scoured available literature, evinced by almost 100 pages of reference notes.

Topics covered include an often surprising range of phenomena common to both species, such as fainting, getting high, heart attacks, self injury, sexuality and resultant diseases, the risks of adolescence and eating disorders.

In this sense, they redefine the boundaries of contemporary medicine. Prior to the turn of the 20th century, many physicians served community members as well as their farm animals; however, with increasing mechanization and urbanization, physicians both gravitated to medical centers in cities and specialization followed thereafter. At that time, veterinarians mostly tended large animals in rural areas. Dr. Natterson-Horowitz is on staff at the UCLA medical center and consults regularly with veterinarians from the Los Angeles Zoo.

The authors mince no words about how some physicians consider themselves an elite corps vis a vis other disciplines such as podiatry, optometry, or the physician versus dentist argument. She argues that there is an “unwritten hierarchy” even among physicians with more lucrative and esoteric specialties sitting at the top of the “physician self-importance pyramid” leaving family practice doctors or empathic psych interns somewhere in the dust.

Engineers, on the other hand, have borrowed from the natural world. Wings and fins have influenced aeronautical science and even the lowly wood drilling worm has served to inspire the boring of tunnels.

Another favorite example is that of the cockroach and what was learned by robotic engineers about keeping robots stable over uneven terrain. Now, the authors say, it is medicine’s turn:

“A zoobiquitous (that is, learning what we can across disciplines) approach could help an obese teen recover his health, a breast cancer patient better tolerate chemotherapy, or a soldier endure combat and its aftermath. Collaboration among wildlife biologists and physicians could yield targeted preventative (sic) therapies for dangerous infections or restore sexual function and even pleasure to frustrated men and women.”

Did you know, for example that there is currently a “Framingham Study for Dogs” (Framingham being the human longitudinal study begun in 1948 to study heart disease), sponsored by the Morris Animal Foundation. The dogs are followed for life, studied by epidemiologists, oncologists, and statisticians. They consider everything from food portions to environmental exposures. The intent is of course to benefit the health of dogs, but also “the animals at the other end of the leash.”

The authors cite many examples of diseases found in both the human and animal kingdoms and argue that we can learn from interdisciplinary collaboration. As one example, even though breast cancer in humans has been blamed on many contemporary factors, it is also found in mammals whose natural lives are not linked to modern environmental exposure.

These include cougars, sea lions, kangaroos, beluga whales, llamas, and even a cousin of T. rex: the gorgosaurus, a meat eating dinosaur. Natural animal models are prized by scientists for their power to expose the true biology of the disease.

Through this kind of study, it is possible to generate new hypotheses about the causes of cancer, but also to warn of disease before is strikes.

In the final chapter the authors relate the story of a disease outbreak in the Bronx in 1999, that caused birds to die in huge numbers. The disease spread to humans, who were misdiagnosed with St. Louis encephalitis (SLE). Then Tracy McNamara, a veterinarian at the Bronx zoo, realized that the usual pattern of this vector-borne illness did not kill the bird carriers. The Centers for Disease Control was fixed in its belief in the causes—and treatment of—SLE.

Ms. McNamara collaborated with a U.S. Army infectious disease laboratory, and together they identified the actual disease as related to yellow and dengue fevers—flavivirus. But humans had to perish as well as countless birds before this enlightenment occurred.

Following this incident, a new government agency evolved—the National Center for Emerging Zoonotic Infectious Diseases. Dr. Natterson-Horowitz contends that her research has changed how she practices and teaches medicine. Other physicians and veterinarians stand to benefit.

The trend for a “species spanning outlook” is growing around the world. It will take courage and determination to break down the walls existing in the minds and hearts of some practitioners, but the end result will be a richer body of knowledge contributing to the science of healing for humans and animals.