Zombies on Film: The Definitive Story of Undead Cinema 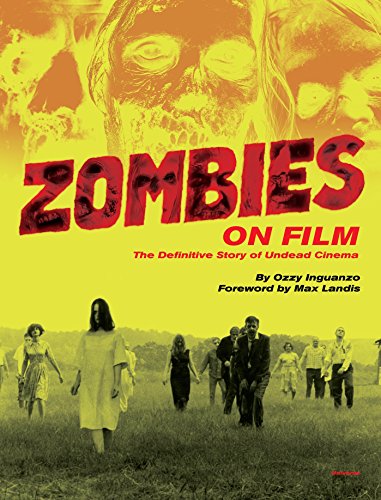 This is a coffee table book. It's that simple. An oversized hardcover that sports a garish and sickly yellow-green dust jacket with a landscape scene of the undead walking through a field. Throw this on your coffee table, end table, buffet table, whatever table, and someone is bound to be interested and pick it up. Chock full of photos from decades of zombie cinema, any casual peruser will be entertained for a good 15 minutes or so. Not bad for a coffee table book.

However, if the reader is looking for any deep insight into the history of zombie cinema, they may want to look elsewhere. Zombies on Film: The Definitive Story of Undead Cinema does a good job of listing movies and their dates of release, and going into some details of the productions and motivations behind specific movies, but other than that, it doesn't exceed its oversized hardcover that sports that garish and sickly yellow-green dust jacket. Eye catching, yes. Thought provoking, not so much.

Despite its title, this is not the “definitive story on undead cinema.” The vast majority of factoids and information can be found in a hundred blog posts about the history of zombies and zombie cinema. For the hardcore zombie fan, this book would best serve as a conversation starter on the subject, but certainly not as an in-depth reference book.

Zombies have been around in popular culture for almost a century. That fact is made plain in the first chapter of Zombies on Film. Good information on the film that started it all, White Zombie (1932), takes up the majority of the first chapter. But this isn't info that any zombie fan wouldn't already know. Again, great for guests to whet their undead whistle then move on, but that's about it.

From that point on the chapters pretty much move in a chronological fashion, listing and talking briefly about the zombie films, and their popularity, that Hollywood, B-movie production houses, and indie filmmakers produced from the late 1930s up through 2014. Excellent photo spreads and stills from these films fill the pages, as well as reprints of movie posters, half-sheets, and lobby cards. Again, visually interesting and eye catching, but way too short on deep insight into the genre.

Is the book worth having? Yes, if the reader plans on putting it on display for others to find and enjoy. It is a great introduction to the subgenre of zombie cinema and will entertain plenty of interested newcomers.

But it is far from definitive and would probably languish on a shelf if placed there since the information within can be found with a quick Google search of the genre. It serves as more entertaining than informative, that is for sure. But, hey, not everyone is looking for details, some just want to see the gory pictures, and that is something this book can certainly deliver.