Zaitoun: Recipes from the Palestinian Kitchen 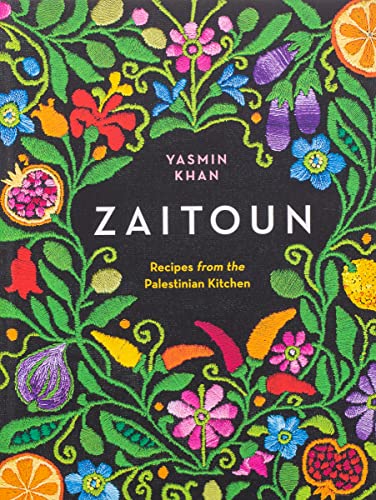 Zaitoun: Recipes from the Palestinian Kitchen, a new book by former human rights worker Yasmin Khan, was published with rave reviews by the likes of the late Anthony Bourdain, chef Yotam Ottolenghi, Nigella Lawson, former Gourmet magazine editor Ruth Reichl, and even chosen one of the New York Times Best Cookbooks of the Year. Anyone with a love of Arab food will crack open this book with great expectation. Zaitoun, the Arabic word for olive, is in a way, a potent symbol of the Palestinian people and their struggle to preserve their culture, so a cookbook revealing one aspect of this culture is not only a cookbook but an act of defiance: We exist!

However, this cookbook is not quite what it seems. Maybe we hope for the culinary cri d’coeur that emanates from the native, but what we get is an outsider looking in and getting only a glimpse, the way a tourist might see a coliseum.

Capturing the soul of a cuisine is an exceedingly difficult thing to do. Even though Khan might understand this as she relates how one Palestinian woman says to her angrily: “we are not clowns in a circus for you to come and watch and make research notes about and then make your name from writing down our suffering,”

Khan then promptly proceeds to make a name for herself rather than reflect on the cautionary meaning of the woman’s words. Khan says the recipes reflect the diversity of her travels. Some are classic dishes taught to her by Palestinian grandmothers, others are her interpretations of meals she ate in restaurants, and others are innovative and inspired by a local ingredient or technique. If you’re hoping for a deep exposition of Palestinian culinary culture in context, that book has not yet been written.

Khan is a storyteller and her travels make for good reading. She is not shy about telling the story of a brutal Israeli occupation and how it affects Palestinians. That’s a huge change from 30 years ago when my publisher didn’t even want me to use the word Arab. And speaking of Arab, Khan does point out the subtle regional variations of Palestinian food that sets it in the nexus of Levantine Arab food in general. She also focuses on the Palestinians living in historic Palestine—Israel, the West Bank, and Gaza—and not the broader Palestinian diaspora.

The first recipe of the book, the classic hummus, portends a warning to proceed cautiously with the rest of the recipes. This recipe is a disaster waiting to happen and is wrong in a fundamental and dramatic way. Somebody did not test the recipes or proof the pages. The recipe calls for 3 cups of tahini (sesame seed paste) to 1 1/4 cups of dried chickpeas and olive oil at the end. This is backward as the proper proportions are 3 cups dried chickpeas, 1/2 cup tahini, and 3/4 cup olive oil. If she truly understood Palestinian cuisine, she would realize that her recipe for hummus (chickpea) is a misnomer because she would have us make tahini (sesame seed paste) dip instead.

The proportions are correct in her recipe for the charred eggplant with tahini recipe mutabbal, but she could have mentioned that you are already familiar with this dish because it is nothing but baba ghannouj, mutabbal being the Palestinian name for it.

One should be wary of too much “inspired” cookery on the part of non-Palestinians writing about Palestinian cuisine. The voice needs to be Palestinian, so although the Olive, Fig, and Honey Tapenade sounds fine, it’s not a part of Palestinian culinary culture. Far too many recipes are innovative in this way, but it is sometimes hard to distinguish recipes that are Khan’s inspiration or the inspiration of a Palestinian chef or cook.

Cuisine evolves and is not a static thing, but when introducing a foreign cuisine to an English-reading audience one must balance between the traditional cuisine and the innovative and make a strong case for the “inspired” recipe.

For example, the asparagus with eggs and za’atar (the thyme seasoning mix) is a dish that one doubts any Palestinian would recognize as theirs and ditto with the Freekeh with Butternut Squash and Kale recipe. Historically, it would have been informative for Khan to tell us why her falafel is made with chickpeas and not fava beans as it traditionally is. The reason is because Palestinians grow chickpeas and the falafel of Egypt, where the dish originates, is made with fava beans.

Khan does, in the prose sections of her book, emphasize the celebratory and commonality aspect of food that ties a divided Palestinian people together and that alone make this book valuable. Especially when one reads the most important comment in the entire book, by Palestinian nurse Essa Grayeb speaking to Ms Khan: “you can’t discuss Palestinian food without talking about the Occupation. About the water restrictions, about the inability to move freely, about the checkpoints, about the house demolitions. This isn’t me being political, this is me explaining that the Occupation affects how we eat. You can’t escape it.” That statement alone makes one feel that Khan should not have included any “inspired” recipes and should have liberated all that has been or could be stolen from their culinary culture, such as Israelis claiming falafel as their own.

One cannot criticize Khan for not having written the book one would have liked to see. She has written a passionate and informative book about contemporary Palestinian travails and how it seeps even into the kitchen because of a brutal Israeli occupation. She needs to be congratulated for that achievement and writing a book filled with love for the people she encountered accompanied by enticing photographs. But this is not the “hugely knowledgeable and utterly delicious” book Anthony Bourdain claims it to be on the back cover blurb.