You Want Fries With That: A White-Collar Burnout Experiences Life at Minimum Wage 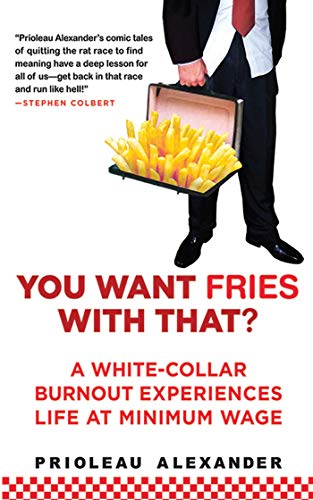 Taking a one-year sabbatical off from a high-flying advertising career to explore the potential of a range of minimum-wage jobs might not be a possibility, or even a vaguely conceived idea for everyone. But that is precisely what Mr. Prioleau (Pray-lo) Alexander did when he hit a low point in his career.

You Want Fries With That? A White-Collar Burnout Experiences Life at Minimum Wage is the paperback release of his journey from the ranks of the unemployed to becoming, in turn, a pizza delivery man, an ice-cream parlor counter hand, a laborer on a construction site, an ER tech (on a strictly look-see-puke basis), a fast food jockey, and a cowboy (imagine a suit shepherding Mormons in the Montana outback and you’ll start LOL-ing long before you even start reading this one).

On the way he also goes through the application process at a Big Box store, but doesn’t quite make it (which is partly to blame on the fact that he declined to say that his schedule would not be able to accommodate their 24/7/365 availability requirement, or so Mr. Alexander thinks).

You Want Fries With That? is less one man’s self-exploration resulting from his trials and tribulations experienced during a period off from work in the corporate sector than it is a telling indictment—albeit told in the most humorous way—of the shortcomings of the lowest echelon of the service and other industries.

Mr. Alexander’s approach is provocative and stimulating as he regales readers with descriptions of the people and places that he encounters in the above-mentioned range of work settings.

One point to bear in mind: The author has been criticized for not always being politically correct. An ex-Marine, his background shows, not only in his work ethic, but also in statements such as the following in relation to a cadaverous 94-year-old woman in ER: “Side note: I can honestly tell you that if I was back in the Marines and on a patrol in some foreign war zone, and came upon a civilian who looked that, without hesitation I would have cleared the room and smothered her . . . and slept like a rock feeling like I’d done something heroic.” Despite his marked lack of empathy in the above instance, Mr. Alexander is, by and large, understanding of how and why certain people land up not only working at a minimum-wage job for a short period in their youth, but might, in fact, never advance beyond that level in their careers.

A key aspect of this work is the unconventional, ground floor up look that Mr. Alexander provides at the industries through which he ventures. Coming from the ranks of the problem solvers and solution finders of industry, his experiences clearly enable him to see both the lighter side and the more serious implications of the hierarchical way in which most businesses and organizations are run. As such, management should pay careful heed to the lessons that Mr. Alexander learns about living life at grassroots level. In short, the work could prove an eye-opener to many.

You Want Fries With That? is highly recommended for anyone who has ever wondered what it really feels like to be on the other side of the counter. The insights that Mr. Alexander provides into the construction industry should also prove invaluable for all those who plan on renovating an existing home or building a new one from scratch.

You Want Fries With That? is a greatly entertaining and informative read—as long as you are not overly PC in your requirements for your reading material.