You Saved Me, Too: What a Holocaust Survivor Taught Me about Living, Dying, Fighting, Loving, and Swearing in Yiddish 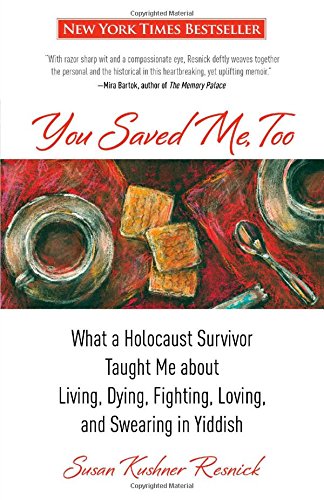 “. . . a story of life, love, and fulfillment that will linger long after the book has been finished.”

A tall, handsome, young Jewish man named Aron Lieb is swallowed up into the Nazi genocide machine of Auschwitz-Birkenau. After suffering untold brutality, starvation, sickness, forced labor, and many near-death experiences, Aron and his estranged brother Bill survive the atrocity.

Everyone else that he loves and admires is murdered in Nazi death camps, including his parents and sisters.

Susan Kushner Resnick is a writer, teaching creative nonfiction at Brown University. Suffering from postpartum depression, Susan has deep psychological wounds of her own. Living the American dream in suburban Boston, Susan has every reason to feel happy. She has a warm and loving relationship with her husband and her young children.

Yet something is missing. Life’s vivid beauty has become a pastel afterthought to her depression.

One day, by chance, Susan and Aron meet. Their innocent connection is sparked over coffee. At first, Susan enjoys chatting with the old Holocaust survivor who has a sparkle in his eye and a penchant for charming women.

From the depths of her depression, Susan needs to talk. Aron is a good listener. Over time, Susan becomes Aron’s best friend, most trusted companion and confidant, power of attorney and life advocate. In return, Susan falls in love with every attribute and defect of Aron’s personality.

Two desperate, hurting individuals sharing only the same religion become locked in a powerful relationship that saves them both in every way a person can be saved.

As an accomplished writer in her own regard, Ms. Resnick has crafted a tale that is consistently nonlinear and filled with robust metaphor. Staged in first-person singular the story is produced via juxtaposition of accounts and experiences from 1919 through Aron’s death in 2011.

Ms. Resnick gradually reveals the terror that Aron experienced in Nazi concentration and death camps. Her dramatic frame of reference is always an unspoken conversation between her and Aron after his death. Rather than refer to him as “Aron,” she calls him, “you.” As the book is consumed, this unusual frame of reference becomes transparent.

She also writes letters to Aron’s long-dead mother, revealing Aron’s charms, foibles and personality attributes. This literary frame of reference works magic upon the reader, although its non-linear aspect requires some early adaptation.

As Ms. Resnick speaks to Aron following his death, we relive aspects of the Holocaust, yet without the minute details of Nazi brutality. We sympathize with him, despite his constant need for attention and affection, exhibited via his on-going psychosomatic illnesses. Susan is engaged by his majestic survival, his penchant for charming women, and later, his slide into unresolved depression, agitation, and imagined infirmity. Despite his age and his psychological defects, Susan is completely captivated by Aron.

Ms. Resnick maintains the reader’s interest while balancing on-going transformations in time, place and person. Each portion of the book alternates between past and present, revealing appalling historical facts about Aron’s survival in the Holocaust, their burgeoning friendship, and his increasingly precarious psychosomatic disorder.

Aron constantly complains of chest pains, though the doctors can find no physical cause. As Ms. Resnick discovers, it is a broken heart. She weaves a touching story by catapulting the reader back and forth through 70 years of genocide, agony, survival, scraping by in America and their escalating emotional relationship.

This is also a tale of how Holocaust survivors often fall through the cracks of contemporary American life. Aron, who deserves the very best possible psychiatric and nursing home care, is shuffled along and pushed aside by a system that fails to comprehend its own mission.

The insipid reparations proffered by Germany to Holocaust survivors remains a virtual insult to the emotional and psychological catastrophe that Aron’s life has become. Susan exposes the repeated failure of local community services, Jewish organizations and Germany’s pathetic attempt to pay back what money cannot purchase. She battles unmoved nursing home administrators and frigid social workers who pass along the responsibility to help this man.

The only success Ms. Resnick encounters comes from individuals reached through a synagogue outreach campaign.

Ms. Resnick leaves us wondering if she and Aron were “soulmates.” The drama we experience in this evolving relationship is both beautiful and wondrous. Ms. Resnick reveals her own emotional weaknesses and the powerful strength uncovered as she fights to save Aron from despair and an uncaring world.

In her drive to save the last days of a charming but increasingly feeble Holocaust survivor, she discovers her own inner power. Just as she saves Aron at the end of his life, his love saves her at a time when she required it the most. Aron’s potent charm and his enduring love is exactly what Ms. Resnick’s fragile ego required.

In the end, they were a perfect match, in a perfect time for each others’ emotional needs.

Ms. Resnick’s writing elucidates the complex permanent psychological trauma that Holocaust survivors typically endure. She displays this via a blunt presentation grounded in the artifacts of contemporary American lifestyle, but with painstaking expression of familial love in the time of Holocaust victims. Her writing is clear and concise, delving deeply into the psyche of two injured souls.

Her style is evocative, sprinkled with generous humor and displaying remarkable insight. She reveals the scars of Aron’s death camp experiences without resorting to detailed descriptions of the horror and brutality. This is a necessary and vital part of the story and she carries it off without shocking the reader with gruesome details.

Aron lifted Susan from the depths of depression with enduring amity. Susan lifted Aron from the terror of his lifelong despair into a steadfast and lasting companionship. Apart, their lives might have faded into a dark unrelenting depression with no end in sight.

Together, the bond shared between them healed both of their wounds. A mature and enduring love remained.

This is a story of life, love, and fulfillment that will linger long after the book has been finished.