You Belong Here Now: A Novel 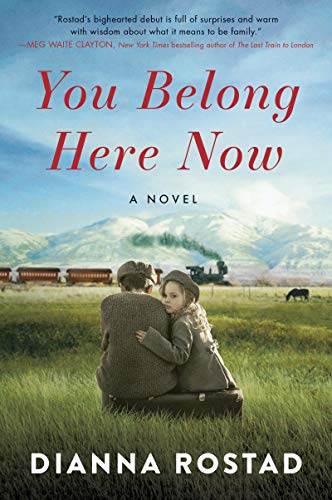 “In lively, descriptive language, Dianna Rostad has penned a heart-warming, epic story built on the premise of a search for belonging that reads as an odyssey in all that it takes to find the heart of one’s family.”

A sweeping, atmospheric story set in cattle country, Bull Mountain, Montana, You Belong Here Now is a heart-tugging, home on the range story told through a wide-view lens with panoramic perfection.

Author Dianna Rostad gives context for this enthralling story in her author’s note on page one: “From 1853 through the early 1900’s, The Children’s Aid Society in New York rescued over 120,000 orphans living on the city streets in the aftermath of war, Spanish Flu, and immigration. The orphan train carried them out to the rick soils of farms and ranches.”

From the onset, the reader is invested. It is April 1925, on a train from Grand Central Terminal headed west, when the fates of three orphans collide under the common weight of untenable circumstances. Charles, big and menacing; Patrick, good natured and Irish; and blond and tiny Opal are a homeless, unlikely trio, until they simultaneously jump from the train, and land as runaways in big sky country together. Out here it is survival of the fittest, and Charles, adept at navigating New York’s mean streets, takes the initiative by creeping to the Stewart family’s barn with the intention of stealing a horse for their travels, but he is caught out.

The Stewart family is the stuff made of Montana’s salt of the earth. Mama, Papa, and their thirty-something daughter, Nara, center their lives on the wide-open land as cattle ranchers, with the aid of Jim, who comes from the nearby Indian reservation. The family is now two less: the eldest, John, having moved to the big city to be an artist, and their daughter, Mabel, taken 20 years prior, having been stampeded by a herd of cattle to death.

Nara, who has traded all feminine attributes in favor of running the ranch, has no mercy for a horse thief, but when warm-hearted Mama meets the guilty Charles, she takes him into the house to feed him, and Papa decides to have the young lad work off his crime. When the family learns there are two more with Charles, the orphans are rounded and given room and board until Charles’s wrong is righted.

Nara, resentful of her parents’ charity, is put in charge of Charles’ and Patrick’s labor. “She had every intention of making sure that horse thief learned a hard lesson. He’d gotten off easy, and easy didn’t belong out here.” As time goes by, Nara doesn’t know what to make of the orphans and is wary. “Since those three had arrived, she had packed her rifle every day, made sure the door was latched every night, and slept with her gun.”

Neighbor Ella Connelly is the enemy of the Stewart family. She is held in contempt for instigating what resulted in the death of Mabel, and grudges die hard in rustic Montana. Nara and Ella are staunch nemeses to the point that, had the Children’s Aid Society appointed anyone in the region other than Ella as its adoption coordinator, Nara might turn the orphans in. When Ella appears at the Stewarts’ ranch to inquire about three runaway orphans, Nara’s heart begins to change, when she decides on the spot, “she’d keep it to herself and think on things.”

It is uneven terrain on the way to the orphans proving themselves to the Stewarts, and author Dianna Rostad fluidly links one cliffhanging episode after another with amazing balance. There are high stakes for every clearly defined character in the story: Mama’s heart longs to help fill the void left by Mabel; the fair-minded Papa sees a chance to give the unfortunates a break while gaining help on the land; and Nara struggles with her identity, once her brother John, defeated, returns to the ranch from the city, with the threat of usurping her hard-won place.

The Stewart ranch is run on a tight schedule, and, in time, each orphan grows to show signs of where they fit in with the family, even as the lives they’ve left behind rumble to the surface in need of redress. There are challenging peaks and valleys as Charles learns to control his temper, Opal confronts her negligent mother, and Patrick’s natural way with wild horses dictates his path ahead.

In lively, descriptive language, Dianna Rostad has penned a heart-warming, epic story built on the premise of a search for belonging that reads as an odyssey in all that it takes to find the heart of one’s family.