You Are Not a Gadget: A Manifesto 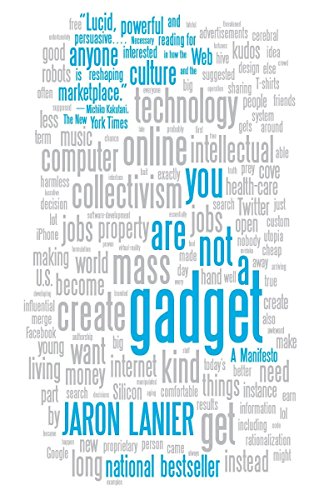 Jaron Lanier, an early developer of Virtual Reality, presents his manifesto, his state-of-the-union address of the cultural impact of the Internet and the Web. He has been prescient in the past. “Many a lecture I gave in the 1980s would end with a skeptic in the audience pointing out loudly and confidently that only a tiny minority of people would ever write anything online for others to read.” But past success is not a guarantee of future prophecy.

The theme of this book is moral right and wrong. The moral stance will be less of an issue to a reader than the chaotic narrative, a discouraging sequence of anecdotes followed by sweeping generalizations. Reading this book is an unsatisfying effort, not from the buzzwords and high-tech concepts as much as from their non-linear presentation. I was reminded of listening to someone over-opinionated and over-caffeinated.

The reader loses out from the author’s inability to follow a thought through. For example, early on, Jaron complains about standards. His issue is first that standards cause “lock-in” that hinder future flexibility, but more importantly that lock-in limits how we may think. Jaron is unable to imagine the possibility that regarding standards designers may expect (or count on) obsolescence, may not care about the installed base, or that there may be multiple standards available (obviously he has never heard the anodyne, “The good thing about standards is that there are so many to choose from.”), or that even successful standards can evolve, to be replaced or abandoned when there is a better or no alternative.

Jaron’s arguments tend to favor the non sequitur. He argues against the “fileness” of a file, and in that argument makes the case that the world may be better if only there was an alternative to the file. Taken at face value, this is interesting. A closer examination shows that there may be no there there. A file is an idea, a label for the aggregation of data. As a concept a file may be independent of its physical form or contents. Any aggregation may be a file and there’s nothing more abstract than that.

Then Jaron also uses the same logic of those he criticizes to reach the opposite conclusion, that instead of the digital revolution leading to a digital utopia, it is leading to a digital dystopia. My concern is that those he criticizes may simply, in their enthusiasm, misread his argument, and take any criticism for encouragement to work harder to get there, where “. . . in a virtual world of infinite abundance only creativity could ever be in short supply.”

The book does contain a precious few well considered critiques thought. Jaron does admit to recognizing the difference between speculation and certainty, and makes a cogent comparison of the similarities in attitude among computationalists who believe in the Singularity (where robots take over the world) and religious fanatics who believe in the Rapture. Continuing in the same thread, he says he does not believe that data can have intent. But from this position he then attacks strong AI (a position that most AI researchers have not held for many years).

At his most coherent Jaron provides a reasoned consideration and denial of computationalism, the belief that at some point in the future software running in computers will lead to consciousness, and robots will rule the world, though he ends his counter-argument with the possibility of an non-abstract computationalism, and a non sequitur, “what can make bits have meaning is that their patterns have been hewn out of so many encounters with reality that they aren’t really abstractable bits anymore, but are instead a nonabstract continuation of reality.”

Overall, this book tells us more about the workings of Jaron Lanier’s mind than it tells us about modern culture and the digital revolution. The best option for the reader may be in attempting to understand Jaron’s fears and in figuring out which metaphor to apply: is he the canary in a coal mine (in detecting where technology leads us on self-destructive paths), or is he the princess and the pea (à la Seinfeld: expressing irritation at fads, in, for example, his concern over mistaking a Facebook friend for the real thing).