You’re Hired!: Untold Successes and Failures of a Populist President 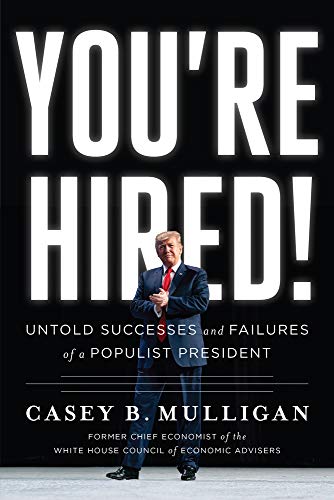 “Mulligan makes it clear that President Trump’s deregulation is working and benefitting the average American.”

It is safe to say that more ink has been spilled on the Trump administration than most previous administrations. Most of the books written about the Trump White House have been negative, with many authors claiming that the administration is a loose collection of harried bureaucrats too busy stabbing each other in the back to actually accomplish any real work. As for the president himself, the potboilers call him everything from a racist to a dangerous demagogue unconcerned with the finer details of public policy.

You’re Hired presents the opposite portrait. Author Casey B. Mulligan, an economics professor at the University of Chicago, served on President Trump’s Council of Economic Advisers (CEA) from July 2018 until June 2019. According to Mulligan, the administration that he worked in was efficient, goal-oriented, and accomplished. Mulligan also portrays President Trump as a kind and engaging executive who is a perennial experimenter. Where others see an ignoramus blathering on Twitter or fumbling his way through speeches, Mulligan argues instead that President Trump is a master of A/B testing, public research, and such novel concepts as the Hawthorne effect (the theory that people behave differently when they know that they are part of an experiment) and the Laffer curve (the idea that governments lose revenue by increasing taxes, which thereby encourages citizens to avoid doing or buying things that are taxed).

You’re Hired conforms closely to Mulligan’s bailiwick, which is economics. This is not a book about the “juicier” side of the Trump administration. For instance, when Mulligan briefly addresses the controversial call with the Ukrainian president, he writes it off as typical Trump language that all of his cabinet was familiar with. The biased media then took the phone call story and ran with it out of their visceral hatred of President Trump. From there Mulligan dives back into economics.

You’re Hired is primarily a full-throated defense of President Trump’s populist and neoclassical policy of economic deregulation. Mulligan, who asserts without reservation that Trump is indeed “a populist president,” has lowered drug prices by removing onerous health sector regulations, significantly grown the US economy from the Obama era doldrums, and has pushed the Overton window on immigration by suggesting that immigrants should be high skilled and forced to pay in order to enter the country.

Mulligan also says the president deserves credit for trying to tackle the opioid epidemic, which the author claims has been exacerbated by the federal government’s decision to expand Medicare Part D and thereby significantly reduced the cost of addictive medication. Cheaper drugs subsidized by the government means more drugs on the streets. The same economic rule applies to college—Mulligan and President Trump both recognize that the more the government subsidizes universities, the more schools raise the price of tuition.

You’re Hired is a mostly wonky book written by a true-blue economist. The language is blissfully free of academic jargon. It also has villains, including Secretary of Health and Human Services Alex Azar, whom the author accuses of working too closely with pharmaceutical companies as well as trying to cover up the federal government’s role in the opioid epidemic; Secretary of Transportation Elaine Chao, whose family ties to international shipping means she’s a steadfast supporter of the Jones Act and the current malaise whereby a Russian oil company delivers national gas to Massachusetts; and Director of the Office of Trade and Manufacturing Peter Navarro, who is described as a bully and bore.

However, no group is excoriated more in You’re Hired than the Washington elites. Those who care more about Burma than Ohio, those who work closely with special interest groups, and those who pass policies because they have no impact on them or their class get it with both barrels in this imminently readable book. It is this paternalistic elitism that makes populism such a force to be reckoned with. Better yet, Mulligan makes it clear that President Trump’s deregulation is working and benefitting the average American.