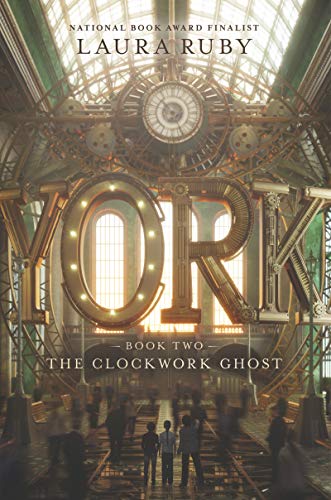 “Aimed at a middle-grade audience, readers on the lower end of that spectrum may find portions of the book . . . a bit too mind-bending and twisty. Older middle-grade readers should find Tess, Theo, and Jaime’s adventures as satisfying as the solving of a well-fashioned puzzle.”

With hints of Ellen Raskin, E. L. Konigsburg, and the National Treasure franchise, the story’s pleasures relied on Ruby’s deft characterization and ingenious city-scaping as well as a reader’s aptitude for occasionally meandering escapades and audacious clue-solving. Anchoring all was an irresistible conceit: 19th century twins Theresa and Theodore Morningstarr, the masterminds behind much of New York’s architecture and technology, encoded a beguiling mystery in the structures of the city itself before mysteriously disappearing well over a century before.

The second volume in the trilogy, York: The Clockwork Ghost, picks up from the first book’s abrupt cliffhanger. Code-breaking twins Tess and Theo Biedermann, with fellow tween Jaime Cruz, remain keen to solve the so-called Morningstarr Cipher, whose resolution is rumored to reveal untold treasure. Although the three kids began pursuing the Cipher’s clues in order to save their apartment building (a Trump-ish real-estate baron is intent on gutting several city landmarks), they’re so deeply invested in cracking the code now, they can’t back out.

Curiosity, though, seems to account for only part of their fascination. In an enigma that deepens across the pages, the Cipher appears to possess an intelligence urging the kids onward; it seemingly needs to be solved—and by this particular trio. As Jaime says, “. . . the Cipher is figuring us out, too . . . maybe it wants us to understand it.”

While his observation gains weight as the sleuthing proceeds and the mysteries clarify, this aspect of the plot is, at times, awkward. It enlists the kids as collaborators, though it also somewhat removes their agency and compromises their ingenuity.

The trail of clues Ruby scatters can feel occasionally random, and the resolution of some seems a stretch. If not all the disentangling is plausible, this only slightly detracts from the fun of seeing the kids puzzle through various classic coding devices (Vigenere, Scytale, or fore-edge painting, anyone?), and Ruby’s generous voice rushes us past some unstitched seams.

Much of The Clockwork Ghost’s enjoyment lies in touring the book’s alternate New York. The kids visit a doppelganger for Brooklyn’s quirky City Reliquary museum; inadvertently summon 22 stone eagles to life at a Penn Station-like terminal; uncover some unpleasant genetic experimentation on spooky North Brother Island; and trek to Green-Wood Cemetery, where, amidst the sprawl of graves, a clue must be unearthed in every sense of the word. Inspired creations—robot-insect Rollers who clear trash, and elevators that traverse zig-zag paths, among others—round out this skewed Big Apple.

Impressively, Ruby arranges her marvels in neat coexistence with what is recognizably our own world—a Nas song, the “bushy-haired TV painter” Bob Ross, Harry Potter, a joke about the oft-scorned Comic Sans font. She also inserts mini-history lessons that delight where they might distract, moving from bits on Dutch explorers and Puritans and Native Americans to pithy critiques of slavery and the justice system. All enlighten rather than intrude.

The story’s heart, however, resides with its three young protagonists. The deepening bond between Tess and Theo, who display a sibling tenderness that’s a step beyond what appeared in the first book, is particularly well-drawn. Jaime, whose attention to detail proves decisive in pursuit of the Cipher, recognizes not only the pleasures but also the value of art as his sketching reconciles him to the absence of his parents and, miraculously, seems to conjure an actual superhero to life. The trio are likable, genuine kids, neither too self-aware nor dismissive of adults, and it’s a delight to follow them along the Cipher’s trail.

Aimed at a middle-grade audience, readers on the lower end of that spectrum may find portions of the book—the sci-fi-ish leanings near the end, in particular—a bit too mind-bending and twisty. Older middle-grade readers should find Tess, Theo, and Jaime’s adventures as satisfying as the solving of a well-fashioned puzzle.