The Yid: A Novel 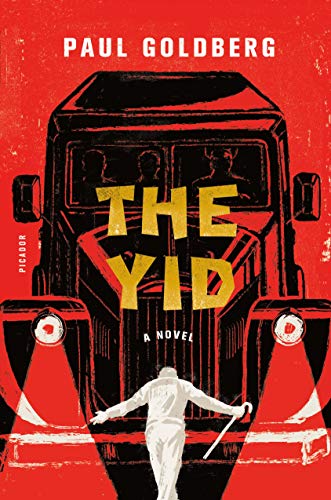 The first thing to be said about this intriguing historical novel is that it ranks high among the “must read” list of debut works. The Russian-born journalist turned novelist Paul Goldberg is funny, insightful, poignant, and impressively intelligent in tackling Stalinism, Fascism, anti-Semitism, hope, despair, and the human condition in The Yid. While some critics have exuberantly compared him to Dostoyevsky, Bernard Malamud, and Isaac Babel he is probably best placed in the company of Gary Shteyngard and Michael Chabon. No matter with whom he is aligned, he is a writer to watch.

The idea for The Yid first came to Goldberg when he was ten years old and living in Moscow. There he heard stories of Jews using blood for religious rituals, known as “blood libel.” By the time he emigrated to the US in 1973 he had added other stories of Stalinist Russia to his mental repertoire. They stayed with him and became the basis for his entertaining and thought provoking novel involving copious purges, cool crimes, and clever characters who manage to defeat a number of very bad guys.

The story begins on a cold February night in 1953 when a Soviet security detail arrives to arrest an elderly Jewish man, former soldier-cum-actor Solomon Levinson. Things don’t go as planned and by the time Friederich Lewis, a Black American engineer and friend of Levinson’s who is often mistaken for Paul Robeson arrives, the scene is set for all that follows. It is not revealing too much to say that ensues is related to a plot to assassinate Stalin, who is planning a Russian Holocaust that would make Hitler’s look like the work of an amateur.

The novel unfolds in three scenes directed by Levinson, and it grows increasingly comic, violent, erudite, and complex. More characters join events and intermittently engage in intriguing dialogues ranging from medical ethics, the broken promise of socialism, and racism, to the works of Shakespeare, Pushkin, and acclaimed Russian poet Akhmatova. All the while, Goldberg captures the brutality and lunacy of Stalin’s rule and the stoicism that prevails in the face of it.

Readers may find some plot complexities challenging and some intermittent discourse annoying, but these occasions are rare and offset by Goldberg’s ability to write hilarious dialogue side by side with acts of extraordinary violence. And his musing reveals useful insights. For example, he writes about Stalinism’s purges through the lens of epidemiology. “Infectious disease can reach the peak, but then inevitably they start to recede. How is Fascism not an infectious disease? How is Stalinism not a plague? . . . Is this outburst of ignorance and hatred akin to a systemic disease?”

The Yid is a book not easily classified. It is a novel that deals with both real and fictional people and events. It derives from history, psychology, sociology, theology, Yiddish theater and culture, war and its aftermath, and more. It is funny and tragic. Its main characters are violent and loveable at the same time. It is full of despair and offers hope. In other words, it has something for everyone who can handle complexities and comic actors capable of things one cannot personally fathom. Even the epilogue of acknowledgements is a good read that helps explain the ethos of the book in amazing ways. That says a lot about the author right there.