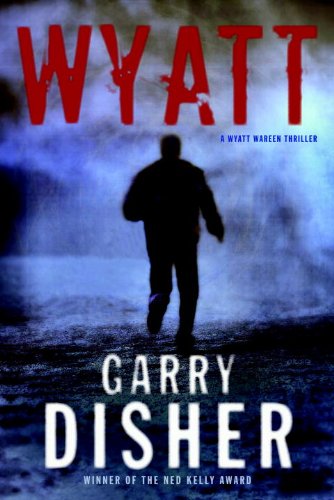 “Wyatt is a fast-paced thriller with more action than a Bruce Willis’ movie, and a bigger knockout punch than Rocky. Gary Disher may not have been a household name until now, but that’s all about to change thanks to Wyatt.”

Cool, enigmatic jewel thief Wyatt Wareen, the indomitable king of the Melbourne underworld has been having an unlucky streak. The jobs have been few and far-between, and the ones that have come along keep getting botched. What he needs is one really good heist to get him settled again.

Now the perfect job may have fallen right into his lap. A shady international courier, one Alain Le Page, is sitting on some very hot merchandise: bearer bonds worth millions. The trouble is, if Wyatt commits to stealing Le Page’s merchandise, he’s going to have to work with Eddie Oberin. Not only does Wyatt not like Eddie, he might like Eddie’s sharp, intriguing ex-wife Lydia a little too much. The job starts to get complicated, and as Wyatt knows, complicated jobs are the kind that tend to go wrong. Big time.

Wyatt may be up to his old tricks, but it’s a new world he now has to compete in. He’s painfully aware that “technology had outstripped him.” Most transactions are electronic. Paper money is almost an oddity having being replaced by plastic as king, and banks seem more about talking business rather than doing the business.

Unfortunately for Wyatt, Eddie Oberin double-crosses him by pumping bullets into his chest. Fortunately for Wyatt, his bulletproof vest saves him. Now he’s on a new mission: a mission to extract vengeance on Eddie and his psychopathic stripper girlfriend, the hilariously named Khandi Cane. Khandi makes most killers look humane, and for me, steals the show in more ways than one. As if this isn’t enough, into the mix comes a blood-seeking Le Page hell-bent on killing Eddie, Khandi and Wyatt for daring to steal his merchandise.

It’s always good to read an original twist on crime stories, and the twist with Wyatt is that he’s no down-in-his-luck cop, seeking out all the bad and evil in the city. No, Wyatt is a criminal, a modern-day antihero, but it’s to Mister Disher deft handling of the character that we find ourselves rooting for him on every page. Almost as if we know that inside us all, there’s a bit of bad trying to get out.

A majority of the characters in Wyatt are morally bankrupt, but that always makes for good crime noir.

Despite being a seventh in long running series of books, Wyatt is a standalone story in the series. Most readers will find themselves hunting out other Wyatt books, as the character is totally addictive and a refreshing gust of fresh air. All in all, Wyatt is a fast-paced thriller with more action than a Bruce Willis’ movie, and a bigger knockout punch than Rocky. Gary Disher may not have been a household name until now, but that’s all about to change thanks to Wyatt.