Written/Unwritten: Diversity and the Hidden Truths of Tenure 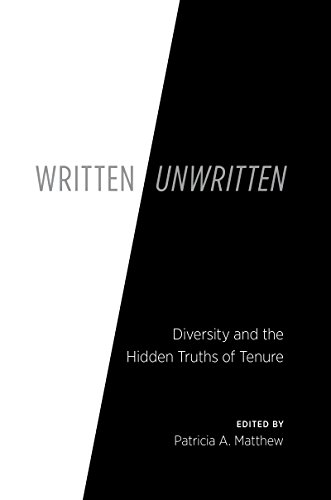 Written/Unwritten is a collection of essays by American academic faculty of color who have written poignant essays about the challenges, barriers, pain, and resilience required of being a minority identity in a college or university. These are institutions that herald back to medieval Europe—white, male, intellectually conservative, and anchored to canonical knowledge and practice. Its rituals may seem remarkably byzantine and opaque to outsiders, and they often are even to insiders. As the volume’s authors note, much of those rituals, expectations, and practices are unwritten. Even when written, they do not always mean what they pretend. Welcome to academia.

In today’s corrosive and divisive public-political discourse, the experiences, interpretations, and emotions expressed by the contributors to this volume might be variably termed as overly sensitive, politically correct, or—more crassly—whining. Spun somewhat differently, dissent, critique, questioning, and protest are taken as an outright attack in a crudely polarized political landscape where you are either “making America great again,” or its opposite. These essays are now, more than ever, a timely and courageous contribution to the exploration and critique of the operation of power as it refracts against diverse, non-dominant identities in American higher education.

In the case of this collective work, the object of power is the sacred higher education apparatus of tenure—literally a property right at one’s university or college. Tenure is best thought of as ensuring a broadly ranging academic freedom to teach and conduct research in a manner that follows intellectual concerns and problems that may challenge, either internally or externally, dominant political discourses and practices without fear of repression, firing, or even imprisonment. All three of those things happen not uncommonly to academics globally who buck the system with their research or teaching.* So, for example, in China (where I happen to be as I write this), conducting research and teaching about human rights or pro-democracy political analysis would land me in some significant hot water with outcomes that would likely end badly.

Tenure evaluations are typically assessed by productivity in research, teaching/learning, service, and sometimes collegiality. Each category is subject to institutional and disciplinary variability and sometimes even variability within a discipline (e.g., journalism vs. media studies within a department of communication). This is complicated terrain that superficially suggests objectivity and transparency, but just what constitutes quality/merit/rigor/excellence/innovation can be open to hot debate. All have multiple and shifting meaning and are cultural constructions by those in historic and contemporary control.

As an academic administrator, the two most important things I am involved in are hiring and tenuring; practices at the very core and concern of these essays. A strong and dynamic faculty is the foundation of higher education. How strong and dynamic is defined is the crux of biscuit. In full disclosure, I am a garden-variety white, middle-class male. As an anthropologist, I am a champion of difference but also aware of my own ethnocentrisms, even though I would like to think of myself as an enlightened and progressive person. This is to say that there is danger in thinking you “get it,” when that might not be the case. This volume, consequently, will help inform me as an administrator and as a human being, and here is why.

At every turn, the volume’s authors remind us that hiring and tenure is a restrictive rite of passage that is often complicated further with the faculty of color who embody difference in ideas and practices that may often run counter to dominant norms, habits, and expectations. Diversity, as they note, is often expressed as a superficial value, but then often goes unsupported, misunderstood, or even tolerated in actual practice. As an administrator, I am reminded of the power of cultural scripts, engrained structures of power and hierarchy, and ritualized action—all of which are often far less than fully conscious for those immersed in and applying them. It’s a treacherous landscape for scholars who do not comfortably hew to normative expectations and approaches.

Contributors also commonly underscored that faculty of color are often seen as having bypassed the normal structures that ensure restriction and, therefore, prestige. That is, there are assumptions that their hiring was not as rigorous as their dominant identity colleagues. So too with tenure. Therefore, so the logic goes, quality is sacrificed for diversity. In reality, they often face daunting challenges that standard, majority scholars do not. For example, they may find themselves in complicated joint appointments. Often these splits occur between an established discipline (e.g., psychology) and an emergent one (e.g., ethnic studies)—the latter is seen by the mainstream as less rigorous and, therefore, having less quality and value. And that assumes there is any understanding of the emergent discipline whatsoever. At tenure time, this is like bridging the gap between Earth and Mars.

Faculty of color may be undertaking different pedagogies, forms of scholarly productivity (including an activist agenda), and forms of service that go unrecognized or serve as signs of lack of rigor. Activities and ideas that go against the grain can be interpreted in ways that go to stereotype: poor personal habits (lazy, lying, hostile, aggressive), a sign of intellectual inferiority or incompetence, or worthy of general dismissal as irrelevant.

Other sacred processes are equally a construction that serve majority interests, especially in terms of what we call “faculty governance.” This is a system by which faculty participate in the crafting of the institution and all its inner workings. This can range from control of the curriculum, to consultation on policy, to the always critical issue of hiring, tenuring, and promoting. The catch, of course, is that faculty governance was designed by and operates in the interest of the majority even if unconsciously.

Finally, there is a new, “post-racial” discourse afoot at the very time where racial grievances are being hotly debated (e.g., Black Lives Matter). This cuts a number of intriguing ways, but two stand out. First, the supposed erasure of difference, injustice, boundaries, and hardship no longer exist. It is replaced (or pretends so) by a new and apparently dominant subject position, at least in an honorary sense. Second, and especially from a dominant perspective, it is the wish to have all that pesky, uncomfortable racial/ethnic stuff go away.

It does not go away, wishful, self-interested, or dismissive thinking aside. This isn’t to say that standards and expectations are a bad thing. Rather, the volume contends that we need to be conscious of how those standards are constructed, by whom, and with what intended and unintended consequences. It urges us to move beyond diversity as tokenism and quotas without real commitment to plural voices, identities, and practices that enrich higher education for our student’s sake, as well as our own. It is a call to challenge and not unquestioningly reproduce old, comfortable, unquestioned ideas and practices —to be better. As Patricia Matthew poignantly notes, “It is not an exaggeration to say that every academic of color has a story about how their subject position has clashed with an institution’s vision of itself.” That’s a good and useful admonition to take forward.

*For an ominous American example, however, see the Professor Watchlist sponsored by the Turning Point USA that currently lists 200 American academics with the mission to “expose and document college professors who discriminate against conservative students and advance leftist propaganda in the classroom.”