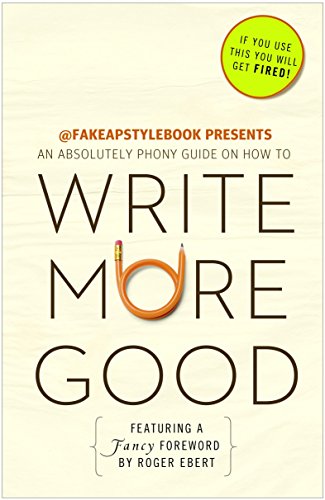 You may wonder what a stylebook is. Put simply it is often referred to as “the journalist’s bible.” Don’t get all bent because it utilizes the word bible—journalists hold both Gutenberg and the bible in the highest regard.

See, the very opening line of a simple book review needs to be clarified so as not to upset anyone. We can’t have that can we?

A stylebook is a way for a reporter/writer/journalist to arrive at the most balanced, judicious way to state something. For those of you who like a juicy conspiracy, let’s say a stylebook is a political correctness manual.

For those who like a hard and fast definition (this one courtesy of Wikipedia): “A style guide (or style manual) is a set of standards for design and writing of documents, either for general use or for a specific publication or organization.”

If you know what a stylebook is then I apologize for just eating up moments of your life you’ll never get back. The Bureau Chiefs, the bound-for-immortality geniuses behind @FakeAPStylebook Presents An Absolutely Phony Guide on How to Write More Good appreciate your sense of fairness and would, I’m certain, turn around and ask you to suspend the same and indulge in their much more palatable standards. The old saw “it’s not so much of a rule as a guide” applies here.

When was the last time you read or heard that “style was king”? Yeah, that’s what I thought. Any five-year-old picking his nose while texting his preschool classmate will tell you content is king. Even so, that content needs to be properly handled to attract the most readers while offending the fewest, and be succinct and clear to the point of annoying: Write More Good is your ticket there.

With the Bureau Chiefs at your beck and call, one can properly set aside all the past injustices of ethics and balance and focus on getting the real story out there, the story that everyday folks are hungry for. Having trouble writing a catchy headline? The Chiefs have you covered:

Write More Good is to readers and writers what Weird Al Yankovic is to music: laugh out loud funny as it pokes fun at old media with new media attitude.

Never let the facts get in the way of a good story. Journalists are expected to come up with a good story based upon facts, which in the 21st century are not exclusive of political correctness, therefore a story isn't so much good as it is boring and interest-serving. Keep it fresh and edgy. Among the ideas presented (in case you can’t decide what to write about):

• For the Olympics: “Finding that obscure sport that no one’s ever heard of because Americans suck at it: curling, team handball, the meerkat toss.”

• On Book review blogs: “Compete in fierce cage matches with other book reviewers for free books, with bonus points for being extra bitchy.”

A glossary is thoughtfully provided at the end of each section to further enhance your writing acumen. Some examples:

• Crop circles: “A phenomenon completely unexplainable to people who have heard the terms “FTL drive,” “Alpha Centauri,” and “Whitley Streiber,” but not “boards,” “strapped,” “to,” or “feet.”

• Quote: “What someone says. Or, you know, the general gist of it.”

• Parenthetical aside: “Additional and often personal information included in a sentence, which should never be used in a news story according to our (douchebag) copy editors.”

As a book reviewer I was delighted to discover, in the section regarding sports writing ethics, that I may be on the cusp of some fabulous philanthropy:

“Years ago promoters and team management would pull out every unethical stop to curry favor with sports journalists: gifts, hotel rooms, hot tips on the ponies, free tickets to events, even—well, especially—prostitutes. Eventually this golden age ended and these perks largely moved over to the automotive press. With the failure of the auto industry, the torch has been passed to book reviewers.”

Write More Good is decidedly not a guide to be blindly given to a child who may be struggling in English class. The peppered references to bathroom humor are low on the list of concerns; higher up is the hilarious yet not-appropriate-for-certain-eyes use of adult language and situations—but entirely appropriate, even excellent, as a bathroom reader . . . men, you know what I’m saying.

Not to be overlooked are the Bureau Chief logos which precede each chapter. Pay close attention to the detail and find yet another wry laugh, albeit in figure instead of word; this works well for those who prefer pictures over words, arguably a large bloc comprised of the hyper-politically correct.

Write More Good is the collegiate fraternity version of Lynne Trusse, unapologetic in its foot-on-the-neck of political correctness. As cherry cigars are to fat, Cuban-rolled stogies, or Boones Farm is to Dom Pérignon, so The Bureau Chiefs are to run-of-the-mill journalism. Get this book, then read it until it’s dog-eared.