Worth Dying For: A Navy Seal's Call to a Nation 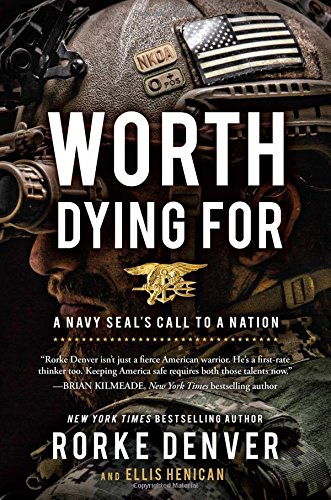 The American special operations forces known as the Navy SEALs have been garnering considerable attention and headlines in the media and even onscreen in recent years, particularly as a result of our ongoing conflicts in Iraq and Afghanistan. The most notable was the operation in Pakistan that eliminated Osama bin Laden.

Author Rorke Denver was a SEAL commander who participated in multiple operations and deployments over the course of his military career. He and co-author Ellis Henican have published what is essentially a primer and guidebook of principles and their accompanying definitions, based on SEAL concepts and training, for the nation to consider and to follow in their own lives.

Denver, whose previous writing effort, Damn Few, was on the New York Times bestseller list, also had a lead role in one of the onscreen endeavors highlighting the SEALs in recent years, Act of Valor. He is currently a public speaker and leadership consultant who lends his expertise to many companies, advising them on teamwork, motivation and various performance techniques.

Written as if speaking conversationally to the reader, each respective chapter explains and necessarily defines in clear and plain English, from Denver’s and other SEAL experiences and perspectives, the following concepts: Heroes, lessons learned from the SEAL brotherhood, how to be brave, how to kill right, SEAL leadership secrets, why they fight as they do, a call to mandatory national service (not necessarily military), bridging the current military-civilian divide, the debt we owe to those who serve, and the possibility that each of us can rise higher than our presumed station in life.

The chapters are further sub-divided into sections relevant to their heading, e.g. ”Finding your inner hero,” “Never quit, no matter what,” and “Everyone should be required to serve somehow.” Each section provides additional context.

At the end of each chapter is a short, literal “bullet” point list of three “Trident Takeaways” (the trident, pistol, and eagle emblem is the pin or badge denoting their SEAL status). These takeaways, effectively, are concepts or lessons discussed in that chapter to be considered by the reader. For example, in the chapter Send Me a Hero, these include “Heroes turn up in unexpected places,” “Heroes are never perfect—allow for that,” and “Choose your own heroes by the qualities you admire.”

In addition to his own and others’ contemporary experiences, Denver also reaches into history to find further examples to emphasize the points he makes. In particular, he references Thucydides and ancient Greece and the Founding Fathers as well as Winston Churchill, Abraham Lincoln, and others who have had the fortitude, leadership, and moral courage to step up and make the tough decisions. At the same time, he decries the “consensus” form of decision making in current government circles.

In the end, the author believes that understanding and employing these concepts can make a difference, individually and collectively, in our society and make our nation even better. He truly believes in the noble ideals in our founding documents which make our country great and that service (military and civilian volunteer) and duty to country can lead the way to the proverbial “more perfect union.”

Inasmuch as this is essentially a guidebook, there are no notes, index, or bibliography to be found within nor are there any photographs. This is no criticism. The concepts and ideas presented in this book give one much to consider that makes it possible to live a better, improved life for oneself and the country as a whole.

Not surprisingly, the best way to describe this book is sound, reasoned, logical, articulate, and mature. For anyone who is even passingly familiar with SEAL training, this is at least partly how they get to be what they are and why these military forces are the best that America has to offer in this uncertain world and the ongoing War on Terror. For everyone, there is much here of which to take note.