The World According to Karl: The Wit and Wisdom of Karl Lagerfeld 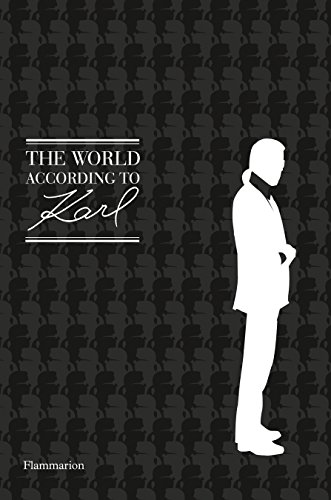 Here’s the thing about The World According to Karl: You need to love Karl Lagerfeld, find him amusing, or simply respect him. You cannot find him boring, innocuous, or self-absorbed. This a book that will make you smile, laugh, shake your head in disbelief, and possibly even scream out loud—but you really have to at the very least like Mr. Lagerfeld in order to have this delicious experience.

Karl Lagerfeld is an original, a one-of-a-kind designer who is chased down streets like a rock star, has become one of the most recognized people in the world, and is practically his own cultural zeitgeist. He says exactly what he wants, when he wants, and how he wants with absolutely no regard for how the words will be construed. And out of this hubris come his most endearing traits.

The World According to Karl centers on his bon mots and opinions of himself, the world of fashion, Chanel, books, style, and life in general. He is irreverent, enigmatic, controversial, opinionated, and definitive—seemingly never at a loss for words. His sense of self is wildly amusing as well as his observations on any subject you toss at him.

On design:
“Designers who get all serious, I find that mind numbing and ridiculous. Making dresses is important, but they’re only dresses. You are not Kierkegaard after all.”

On being controversial:
I am a fashion nymphomaniac who never gets an orgasm. I am never satisfied.

Karl on Karl:
“The important thing you should know about me is not everything you’re told by others is necessarily the truth.”

This is a book that demonstrates the man’s biting and truthful wit as well as his ability to behave in a way fitting this character of his own creation. The man is a dynamo who will never be replaced in the world of fashion as he has single handedly created probably more fashion than most designers even if you added on three more lifetimes.

He is prolific in every sense of the word.

Lagerfeld was and is one of the great juggernauts of international fashion. After all, it is he alone resuscitated a dying brand and turned into an unstoppable runaway train with no limits in sight.

On luxury:
“I hate rich people who live within their means.”

On books:
“Buying books is a real disease for me, but I don’t want to be cured.”

Karl on Karl:
“I’m not the in the least complacent towards myself. But I’m always very forgiving of other people. Because I am only interested in myself, or rather in the things I do. And absolutely not in other people.”

Love him or hate him, a Karl Lagerfeld will come around only once in our lifetime.