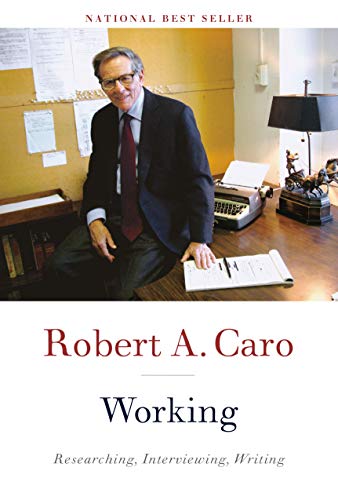 “Perhaps most rewardingly and unexpectedly, Working is a book about what makes great writing: 'Rhythm matters. Mood matters. Sense of place matters. All these things we talk about with novels . . .'”

How did Robert A. Caro become the most important political biographer of his generation after chronicling the lives of only two people? That’s not exactly the question Caro sets out to answer in Working—a new, surprisingly snackable memoir of Caro’s writing life—but the book proves quite successful in explaining his methods.

With the lessons of Working in mind, all you need to replicate Caro’s success is his dogged persistence, crackling prose, unflagging energy, steadfast refusal to leave any stone unturned, sweeping vision of how political power operates, and the airtight sense of purpose to render the distilled essence of a 700,000-word biography as yet unwritten in two paragraphs on a single 3"x5" index card.

For those who don’t know Robert Caro’s work, he won the 1975 Pulitzer Prize in Biography for The Power Broker, which recounted the rise and fall of New York City Parks Commissioner Robert Moses. Though never elected to public office, Moses amassed more power in his 44-year career than any single figure in New York (mayors and governors included), and masterminded the construction of virtually every major roadway in the five boroughs and surrounding suburbs, as well as two World’s Fairs, the United Nations campus, and a vast array of bridges, parks, beaches, and massive housing developments. Along the way he laid waste to entire neighborhoods and displaced as many as a half million citizens.

Caro has also earned multiple national awards for his five-volume (four down, one to go) The Years of Lyndon Johnson. He earned his second Pulitzer in 2003 for the third installment, Master of the Senate, in which Caro constructed a concise and definitive history of the legislature’s upper chamber and chronicled LBJ’s tenure as the single most accomplished American parliamentarian since the Clay-Webster-Calhoun Great Triumvirate of the pre-Civil War era.

What Moses and Johnson have in common, Caro maintains, is that their careers are prime examples of the accumulation and application of political power in 20th century America. Both biographies explore that theme as it plays out in the context of a city and a nation, and use Moses and Johnson as a lens through which to explore their times.

Most of all, Caro’s books provide object lessons in the nature of power itself. “Really, my books are an examination of what power does to people,” Caro explains in Working (paraphrasing a passage from the early chapters of Master of the Senate). “Power doesn’t always corrupt, and you can see it in the case of, for example, Al Smith or Sam Rayburn. There, power cleanses. But what power always does is reveal, because when you’re climbing, you have to conceal from people what it is you’re really willing to do, what it is you want to do. But once you get enough power, once you’re there . . . then you can see what the protagonist wanted to do all along, because he’s doing it.”

One of Caro’s greatest assets as a biographer is his absolute commitment to his subjects—not just in the pursuit of his overarching themes, but for telling multiple intertwined stories in a manner that’s as vivid, complete, and true as humanly possible.

Working devotes much attention to Caro’s research methods, which were inspired by the “turn every page” mantra of his first meaningful journalistic mentor at Long Island’s Newsday newspaper.

Caro the no-stone-unturned researcher met his match in the voluminous archives of the LBJ Presidential Library. There, he admits, it would have taken several lifetimes for himself and his wife, Ina—his longtime research partner—to look at everything housed therein.

Early on, Caro realized that he couldn’t properly explain LBJ’s prodigious drive for political power without fully understanding who the 36th president was before he got to Washington, and how the impoverished Texas Hill Country that he came from shaped the boy he was and the man he became. “I had thought I would only have to write a chapter or two on Johnson’s youth, and wouldn’t have to do much research for it,” Caro recalls in Working. “There were already seven biographies of Johnson in print” at that time, and “they all related the same anecdotes which portrayed young Lyndon as a sort of Horatio Alger hero of the Hill Country, smiling and popular, who had risen through ambition and hard work.”

In his first efforts to make inroads into LBJ’s early history, Caro found it hard to move beyond those familiar stories. The people he spoke to had already “talked to too many people like me,” writers who dropped in for a splash of local color to liven up the same old yarns. As a result, that was all they got.

Over Ina’s initial, half-joking objections (“Why couldn’t you write about Napoleon?”), the Caros moved to the Hill Country for three years. Soon the locals “started to talk to me in a different way,” Caro reports, and provide him with insights into a much more complex young man than the usual LBJ stories portrayed—“brilliant . . . ambitious . . . unscrupulous . . . ruthless . . . even beginning to be feared.”

Caro also learned about the poverty and desperation of the Hill Country of Johnson’s youth. This allowed him to assemble a clearer image than any previous biographer had provided of how profoundly, for example, rural electrification transformed the region—and what it meant to locals when LBJ “turned on the lights” through his tenacious efforts in the House of Representatives in 1938.

Caro also depicts his own approach to interviewing as persistent to a fault. He outlines his research process—the books, then the newspapers, then the archives, and finally the interviews. He says he conducted no less than 22 formal interviews with Johnson’s speechwriter, Horace Busby. “But none of this is enough,” Caro explains. “You have to ask yourself, Are you making the reader see the scene? And that means, Can you see the scene?”

When interviewing a subject about a particular incident, Caro says he hammers these questions over and over—“What could you see? What did you hear?”—often ad nauseam over the course of multiple interviews. “You have to keep going back to important people,” Caro explains, “people who were important not necessarily because of their status but because of what they saw.”

Ultimately, Working is a collection of stories, from Caro’s riveting account of his bracing interviews with Robert Moses after the wary master builder finally realized his would-be biographer wasn’t going away, to his stranger-than-fiction description of how he finally, definitively answered the question of whether Lyndon Johnson stole his first senate election.

Perhaps most rewardingly and unexpectedly, Working is a book about what makes great writing: “Rhythm matters. Mood matters. Sense of place matters. All these things we talk about with novels, yet I feel that for history and biography to accomplish what they should accomplish, they have to pay as much attention to these devices as novels do.”