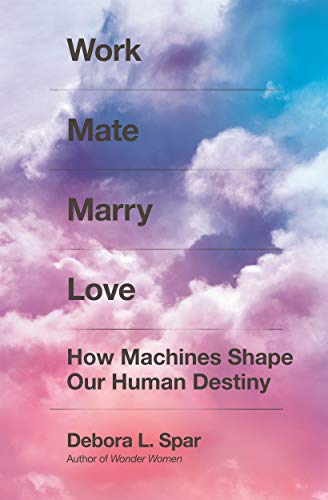 Debora L. Spar’s new book, Work Mate Marry Love, appears urgent and timely. The book takes on such topics as gender roles, reproductive technologies, and the changing nature of work—all of which haunt a public under terrible social and economic pressures. Yet those pressures are only occasionally addressed, and when they are, the framing reveals much about this book’s fundamental flaws.

Work, Mate is divided into three sections, each ambitious enough to merit its own volume. “The Way We Lived” offers an overview of human history up to the 1960s. “The Way We Live Now” surveys all of modern sexuality and work. “The Way We Will Live” embraces the future. But realistically, not a quarter of that material could be thoroughly addressed in a single book. While a thoughtful scholar might narrow her vision or consider a multi-volume approach, Spar barrels forward with more ambition than care.

It’s an approach that’s not entirely surprising. Spar is indeed a Harvard professor, but she’s not a scholar. Rather, she teaches Business Administration. If she’d limited her discussion to a business approach, there might be value here, but Spar instead attempts to illuminate complex issues of gender, labor, and history without a significant background in any of the three. The resulting material is simplistic, poorly researched, and resistant to both intersectionalism and decades of careful scholarship.

The resulting “We” I “the way We live” is overtly white, middle-class, bourgeois, aggressively capitalist, and apparently heterosexual until the 1980s, when white, middle-class gay men spontaneously emerge to join humanity’s run toward uncomplicated posthumanism, mediated by technology and pleased with the results. This is, of course, the “we” that’s been represented in mainstream discourse for most of American history, but in the present context, it borders on obscene.

By her argument, agriculture inevitably creates patriarchy, as though the Indigenous matrilineal cultures had never practiced the agriculture to produce corn, squash, tomatoes, or potatoes. A chapter later, the Industrial Revolutions cotton mills run on the labor of white women, while the enslaved Black labor that produced the same cotton is completely elided. Both are erased for the simple reason that, in Spar’s framing, all technology is fuelled by proto-capitalism until capitalism emerges to improve the process, and techno-capitalism inevitably improves living conditions (for everyone who matters, for everyone worth mentioning).

Spar presents little evidence and less reasoning to support this argument. Events taking place at concurrent moments in history become causal by the very fact of their correlation. Anywhere technology can be framed as the cause of social transformation, Spar does so.

That insistence leads to actual absurdities, as when Spar suggests that “we trace feminism’s rise at least in part to the advent of household appliances and secure contraception” presumes a shocking amount about both the reach of household appliances and the nature of feminism. It supposes that only when white, middle-class women noticed that they suddenly had less domestic work for their servants to conduct, they suddenly and spontaneous realized Betty Friedan-level feminism. All other feminisms, implicitly, don’t signify, because they emerge from people (queer, working-class, racialized, disabled) who don’t matter.

Similarly, Spar frames the emergence of birth control as a triumph for women, without acknowledging the deeply problematic history of that phenomenon. Margaret Sanger cameos as “a passionate and longtime advocate for medical contraception,” without reference to Sanger’s support of eugenics. The same discussion frames The Pill as the product of the goodwill of wealthy philanthropist Katharine McCormick, without considering McCormick’s class position or the ethics of her influence on medical research.

The later chapters offer little except for thinly presented case studies of contemporary shifts gender roles and reproductivity. The idea of reproductive labor, which should be so crucial, disappears beneath an uncomplicated presentation of surrogacy and egg-donation: “Gay couples or single men could hire a surrogate to give birth to a child conceived with another woman’s eggs.” The enormous tensions here between gender, wealth, and bodily autonomy go entirely unexamined.

A chapter later, Spar invokes the “thinking machines” of Alan Turing without discussing the military-industrial complex that drove Turing’s research or the repressive laws against queer existence that destroyed the man himself. This is a field of enormously fertile (pun intended) research, none of which Spar has apparently sought out or examined even in passing.

If Work, Mate, Marry, Love is intended as a scholarly text, it’s a failure. Its chapters are thinly presented and poorly researched, ignoring decades of careful, detailed scholarship. There’s little here that isn’t discussed with greater care and complexity in Donna J. Haraway’s crucial Simians, Cyborgs, and Women: The Reinvention of Nature (1989), which virtually every humanities graduate student has read, and where, if Spar were serious about researching this topic, she would certainly have begun.

If Work Mate is intended as an introductory text for a popular audience, it’s an oversimplified travesty, apparently intended to provide a theoretical framework for business and political policies that fail to take into account the lived reality and ongoing needs of most of the people who actually “live now.”

Annette Lapointe holds a PhD in comparative literature with a specialization in technology and the gendered body.