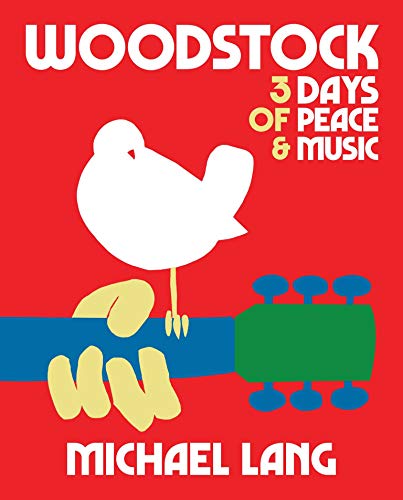 "There was a feeling of immersion into a vastness of humanity, of what seemed to some the beginning of a new age."

An idea out of the blue. A compulsion to make it real. Little did they know how enormous their dream would become. August 15–17, 1969, three days of peace and music morphed into "the largest peaceful gathering in the history of the world at that point." Nothing like it has happened since. But it was more than just a music festival. It was a commitment to ending an unjust war in Vietnam through peace, love, music and community.

This year marks the 50th Anniversary of the founding of Woodstock, and this work is the official 50th Anniversary book on the festival by its co-creator and co-founder, Michael Lang. It was called "Woodstock" because the investment group that backed the concert was called "Woodstock Ventures." "From the beginning I believed that if we did our job right, people would reveal their higher selves and create something amazing." And they did.

Joel Rosenman and John Roberts financed the festival, and Michael Lang and Artie Kornfeld, musicians, planned it. It was first set up in Wallkill, New York, but the townspeople threw them out. They had to find another location quickly. Max and Miriam Yasgur owned a dairy farm in Bethel, 70 kilometers southwest of Woodstock. They offered their property as a location. ("Bethel "is Hebrew for "House of God.") "Woodstock was to be advertised as an event that was about us, our culture, our music, our art, and our values." At first, the residents of Bethel were suspicious, thinking that they were dirty. But the organizers turned their attitude around by hiring locals to work on the site and buying local produce.

Because it was the first big music event that made national news, they came from all over the country, by car, bus and on foot. Traffic came to a standstill. So many people tried to come that a whole stretch of the New York State Thruway was closed. There were so many cars that it looked like Napoleon's army retreating from Moscow. "Traffic Uptight at Hippiefest" was how the Daily News described the situation. "But as they abandoned their cars along the roadsides or were stuck in the traffic jam, spirits stayed high. People helped one another—miles from the festival site, there were songs and celebration."

The organizers expected around 200,00 people and ended up with half a million. They tried to sell tickets: $8.00 per day or $18.00 for the three days. But they had trouble collecting them. People just walked into the field and sat down. They also couldn't collect money for food from such long lineups. So they gave free concerts and free food and lost money. "At Woodstock, we would focus our energy on peace, setting aside the onstage discussion of political issues to just groove on what might be possible."

There were not enough portable toilets, and by day two they ran out of food and medical supplies. Helicopters came to the rescue. The townspeople of Bethel also brought food. There was a hog farm nearby run by Hugh Romney, nicknamed Wavy Gravy. His farmers organized free kitchens, brought food supplies, and showed them how to set up campgrounds. He was a phenomenal support to the festival, even providing security. "Wavy is the living breathing embodiment of the spirit of Woodstock."

It didn't matter what religion or color you were: "white, black, brown people all came together." One man came barefoot, naked under his robes, with his lover, a sheep. He was an animal rights person. Others made love and swam naked in the lake. They smoked pot which was also sold in a kiosk. When someone overdosed, they went into a tent where a doctor helped them to recover. There was a real sense of community when everyone helped one another by sharing food, sleeping in their cars, and finding lost items. "There was a feeling of immersion into a vastness of humanity, of what seemed to some the beginning of a new age."

A strict policy was in force, prohibiting political speeches or songs by the artists, some of whom were Joan Baez, Santana, Ritchie Haven, The Who, Ravi Shankar, Arlo Guthrie, and Jimi Hendrix. The music was varied from Soul, Rock, R&B, to Gospel. When Abbey Hoffman tried to make a political speech, a musician from The Who banged his guitar on Abbey's head. Abbey left and never came back. However, Jimi Hendrix crossed the line when he closed the festival with his own rendition of “The Star Spangled Banner,” making a political commentary. But some careers were made at the festival. "It was just one good group of people after another. And different kinds of music."

Some officers from the New York Police Department moonlighted as security, led by Wes Pomeroy. They also directed traffic and helped with medical emergencies. They called themselves the Please Force," a reference to a peaceful, non-threatening way of keeping order: "please don't do that, please do that instead." It was a miracle that, although the police force was not allowed to carry any weapons, there was no violence, looting, or rioting. Remarkable for a crowd of that size.

Then came the torrential rains. Towers were in danger of falling, kids were on the tower and had to get down fast, tents blew away, and everyone began to put plastic sheeting over the equipment and stage. One could see others trying to get to their cars, wallowing in mud. However, some decided to have some fun and started playing in the mud, sliding through it and making somersaults. "Engraved in my memory are the storm clouds forming near the end of Joe Cocker's 4:30 set on Sunday afternoon. Walking offstage he spotted the thunderclouds and quipped: 'Did I do that?' The Sunday news headline read: "Hippies Mired in Sea of Mud."

"The kids were wonderful, honest, sincere, good kids who said: 'Here we are. This is what we are. This is the way we dress. These are our morals . . . I think America has to take notice." (Max Yasgur, owner of the dairy farm.)

This blockbuster coffee table book is a must for everyone who wants to understand the counterculture of the ’60s and the reason Woodstock defined a generation, was a cultural phenomenon and a landmark national event that changed the lives of everyone who participated. As soon as you open this book, you'll feel transported to the magic of Woodstock through the dazzling larger-than-life photographs.