The Woman with Two Shadows: A Novel of WWII 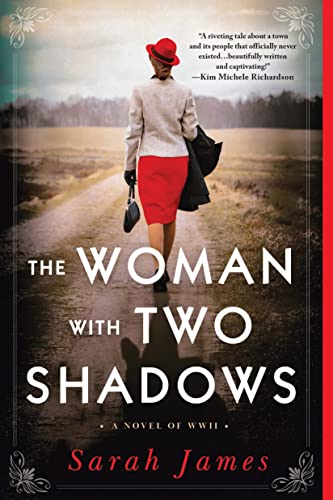 It is 1945 and sisters Lillian and Eleanor Kaufman live in New York City. Lillian is older than Eleanor, her identical twin by seven minutes, and the two are as different as day and night. Lillian is analytical and resolved to become a physicist. In her senior year at Columbia, she is no-nonsense and determined to make it to her goal as a Harvard grad student. Eleanor is the type of gal everyone is drawn to: flamboyant, captivating, flighty, and heading for a career on the stage.

Lillian spends almost every waking hour at the college lab, working tirelessly and quickly irritated with anyone and anything inconsequential or emotional. Emotions are to be kept inside and smothered, and though she loves her baby sister, her actions and manner irritate Lillian. If only they hadn't lost their father, which turned their mother despondent and barely able to get out of bed, Lillian would have no problems planning her life.

All aflutter, Eleanor is scheduled to audition for a show. Yet when the phone call comes in for her, Lillian answers it, posing as Eleanor taking the message about a revised tryout date. Thinking of telling Eleanor later, Lillian heads off to school with half a mind on the call.

Lillian's primary concern is getting her Ph.D. at Harvard, but she wonders, If Eleanor acts in a play, who will take care of their mother? She has worked too hard to give up now and refuses to let Eleanor overshadow her as she always does. Every man falls for Eleanor; everyone looks at her and wants to befriend her. Even their mother shows a preference for her over Lillian. It's just not right.

Absorbed in her schoolwork and preparation to win the Allerton Prize, a scholarship to gain acceptance to Harvard, she loses track of time, only to later remember Eleanor's schedule change. Oh well. Lillian, who does not let her mind get caught up in trivial matters, figures she'll tell her sister later. She doesn't even consider Eleanor will find out she passed herself off as Eleanor.

Members of Lillian's class are offered jobs at the Clinton Engineer Works on an Army Base in Tennessee, promising the men deferment from the draft and the ability to continue their education. Max Medelson, Lillian's classmate and Eleanor's beau, jumps at the chance. He is sure Eleanor will attain the lead to open in Chicago, but before he departs, he proposes to Eleanor. Lillian, unintentionally eavesdropping, is shocked. Eleanor does not love him.

Tension elevates when Lillian voices her dislike for Max. A gulf grows between them, simmering with anger and animosity. Lillian considers him hallow and low class, firing many arguments, widening the chasm between the women. Max leaves, and when Eleanor learns about Lillian's deceitful deeds, she signs up for employment in Tennessee and goes after Max.

Lillian brushes this off as her sister's capriciousness and decides it will blow over and she will be home soon. Time passes, and Lillian hears nothing from her, no calls or addresses to send her letters. One day, while at the school lab, a summons has Lillian racing to reception to take a phone call. Heart leaping, she hopes it is Eleanor calling. But it isn't Eleanor. It's Max! What the heck?

"'Don't hang up,' he said quickly as if reading her mind. 'It's important. Have you heard from your sister?"'

"She did not want him to have the satisfaction of knowing that he was in more regular contact with Eleanor than she was. And yet, there was something in his voice, some hitch of desperation that made Lillian fear honestly was required. 'No.'

"The rest of the office faded away. Lillian clutched the phone. 'What do you mean?'

"'She disappeared from the facility. Almost two weeks ago. No one's heard from her since then. Did she tell you where she might have gone?'"

This is more than one of Eleanor's moods—something serious has happened to her. With Max's instructions to travel and to meet him upon arrival, Lillian lies to her mother and flees, worry churning in her gut. After a long and tedious journey, Max is nowhere in sight. What seems hours later, Lillian spots an Army bus approaching. A young woman excitedly runs up, believing her to be Eleanor, and drags her to the vehicle to return to the base. Now she must pass herself off as Eleanor, for no one believes she is Lillian. No one but Max, but where is he?

Arriving at the dorm, Lillian scrabbles through Eleanor's things while her roommate Emmy prattles on. She desperately needs to find a clue as to her sister's location. There is nothing. So Lillian takes on Eleanor's identity, imitating her, hoping to discover her whereabouts. Working at Eleanor's job, she learns of rumors of an affair between Eleanor and Andrew Ennis, a renowned big-wig physicist Lillian would love as a colleague.

Again, where is Max? When she eventually encounters him, he fills her with tales of subterfuge and secret projects allegedly using people as test subjects. Lillian thinks he's crazy and will not listen to his stories. Her search is hopeless, so she hunts down Andrew to see if he and Eleanor are involved. He claims to have no idea where Eleanor is, and, unlike anything Lillian ever experienced, she becomes captivated by the physics genius, soon finding herself working for him, falling under his charms.

When someone besides Eleanor is known missing, Lillian's pulse quickens, and her rational mind points her to trust no one. Her discoveries regarding assignments she once desperately wanted to be part of being brought to light have her rethinking her whole purpose and existence. She now knows she has her work cut out for her—unearth the actual function of this facility.

Although fiction, this comprehensive and descriptive novel demonstrates factual occurrences during the 1940s. At first, Lillian is portrayed as a dedicated scholar intent on making her mark on the world. Yet, as we delve deeper into her relationship with Eleanor, we see she is opinionated, self-centered, and egotistical. Jealousy plays a key role, though her mind focuses on herself as a self-affirmed caretaker of her baby sister and mother. What she deals with throughout her experiences makes her look inward and become more retrospective. For a debut author, The Woman with Two Shadows provides a little bit of everything: romance, suspense, and history, along with human emotions, failings, and soul searching. Author Sarah James is someone to be watched.