The Wolf and the Watchman: A Father, a Son, and the CIA 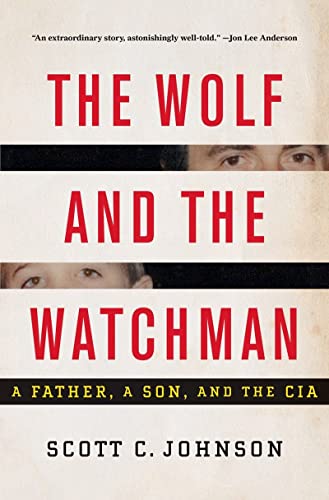 “. . . his life was really not that much different than ours—except maybe for the endless family secrets.”

That is the story Scott C. Johnson tells in The Wolf and the Watchman: that of his father the spy, his own life as a war correspondent, and their close and loving relationship—a life of neverending secrets and lies and careers overlapping.

Many years ago The Naked Runner, a fictional story of a former OSS agent, his son, and the CIA examined such a relationship, but the story read more like a spy/mystery novel.

The Wolf is about a real world CIA operative, Keith Johnson, who like most operatives has a family and deep secrets—secrets with associated rules that, by default, his wives and son Scott must keep, and the lies they must tell in order to do so.

The Wolf is also a story about a son’s meeting unrealistic and self-made expectations, depression, creating “adventures” and how cultivating sources as a journalist and as a spy are very similar. Art forms involving trust, understanding, and playing the part expected. Both involve confidentiality, deep trust and . . . secrets.

Keith Johnson was recruited in the late 1960s by the CIA while an expatriate living in Mexico. His son Scott was born into the business, but believed his father was a diplomat until he reached the fine age of 14 and his father took him to “work,” to a nondescript insurance agency in Michigan fronting CIA operatives.

Why? Michigan was and still is the home to many Middle Eastern immigrants and possible sources of information concerning the “enemy,” real or perceived. It was here that young Scott discovered his father’s secret and his own mandated role to keep that secret at all cost.

It is also a story about the very close relationship between father and son. Even as Scott worked in wartorn Bagdad and his father, then a CIA contractor, in Afghanistan or Bosnia, they wrote, emailed, and called the other regularly. There are long drives and dinners, talks about life and of the similarities of their chosen occupations—Scott’s questions and Keith’s avoidance.

It is a story of a son trying to find the “real” father, the one who once lived outside of this cloak and dagger bubble. That is the theme of this memoir, woven through postings and wars, drives through Washington’s Cascade mountains and along the shores of Puerto Vallarta.

The Wolf is about Scott’s attempts and discoveries during his 25 years of trying to pry information from his father the spy.

Scott’s life, in his father’s mind, was really not that much different than that of a child of any U.S. career diplomat, though living at the CIA training facility at Camp Perry, Virginia, “The Farm,” did have its moments.

Scott was physically and emotionally removed from the outside world. “The Farm” held its own friends and secrets that any preteen boy would be automatically drawn to, restricted areas with “missiles,” unmarked military helicopters streaking through the sky, and lots of gun fire.

Scott’s own story as a newly minted Newsweek journalist is fascinating and complicated. Scott has his own secrets, confidential informers, and dangers, especially during his time in Iraq during the civil war and insurgency after the American invasion.

One of those secrets is the emotional toll of keeping his and his father’s secrets and the continuous lying, the deep depression, and his heightened wanting to know the “real” Keith Johnson. It is the latter that keeps this book flowing like the Tigris River.

It is not the action scenes or the secrets that will capture the reader, but the complicated lives of father and son, and discovering that their story is really no different than our own, attempting to meet want each son perceives as his father’s expectations, running away but never avoiding them, and never truly understanding the relationship—even when it is as close as Scott and Keith.

His final tale, his relationship with former insurgent “Abu Ahmed” (of course, not his real name) that brings the entire story together. It is a fascinating tale of clandestine meetings during Scott’s final assignment in Bagdad, ferreting out how and why the insurgency came to be and why tribal allegiances flowed so easily between Al-Qaeda and the Americans. It is within this story one finally understands why journalism and spying are really not so dissimilar.

The Wolf is an easy, smooth, and fascinating read. Scott’s story is not told through rose colored glasses, but is an honest and revealing one that captures things the author might not have intended: that all father-son relationships are complicated, sometimes raw; and that his life was really not that much different from ours—except maybe for the endless family secrets.