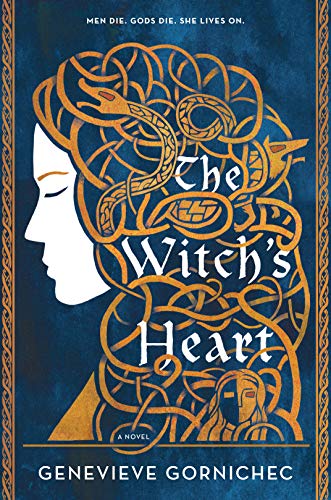 “The Witch’s Heart is gripping, evocative, and alternatingly joyful and heart-breaking. Gornichec’s prose is lyrical and fierce, just like her protagonists.”

“Long ago, when the gods were young and Asgard was new, there came a witch from the edge of the worlds.”

Genevieve Gornichec’s debut novel, The Witch’s Heart, breathes life into the women of Norse mythology with nuance and wit, ensuring the novel an enduring place in readers’ hearts—and shelves. The story follows the witch Angrboda as she fights to protect her family from Odin’s wrath, filling in the gaps of myth with prose that is delightful, at times surprising, and epic from start to finish.

Angrboda’s story begins with a burning. Exiled for refusing to give Odin the knowledge he seeks, with her heart cut out from her chest, she flees to a forest at the edge of the world. There, she encounters the trickster Loki, who returns her heart, saying, “‘I was going to eat it, for some reason, but I decided that maybe you should have it back.’”

Gornichec’s Loki is as irreverent as he is clever, and she turns an unflinching eye on his marriage to Angrboda. Angrboda loves Loki for and despite his mutable nature, but she is not blind to his faults as a partner and as a father to their three unusual children. Through Angrboda, Gornichec explores the expectations placed upon powerful women, both of myth and in our own world, and the lengths mothers will go to protect their children. Loki’s exploits serve as background, sure to please Norse mythology enthusiasts, but the Trickster never eclipses Angrboda’s story. Here, the script is flipped. The women of Norse myths take center stage. Odin, Loki, and Thor hover around the periphery.

Angrboda is not the only powerful woman in The Witch’s Heart. Her enduring friendship with the huntress Skadi underlies the first half of the novel and solidifies into something deeper as the story unfolds. Skadi’s fierce nature initially appears at odds with Angrboda’s even temper, as if to highlight different avenues of strength. By the novel’s end, however, women’s anger and grief take center stage as Gornichec celebrates and interrogates the ways in which women have always existed within structures of power, and the prices they’ve paid to survive.

The Witch’s Heart is gripping, evocative, and alternatingly joyful and heart-breaking. Gornichec’s prose is lyrical and fierce, just like her protagonists. She works within traditional mythic prose parameters while also modernizing the language for a contemporary audience.

Her dialogue is especially vivid.

‘I may have heard that your knowing of things was what got you stabbed and lit on fire, multiple times. Perhaps from now on you should just play dumb.’”

Never anachronistic despite the contemporary feel, the freshness of the exchanges between the characters brings their personalities into sharp relief. Angrboda and Loki bicker and spar like most couples, and Skali’s gruff-but-caring spirit comes to life as she navigates her feelings for Angrboda. The humor in Gornichec’s dialogue is rarely the laugh-out-loud variety, but its consistency offsets the occasionally tragic turn of events, tossing the reader a lifeline.

This isn’t to say the tragedies lack depth—far from it. Angrboda’s heartbreak is palpable and gut wrenching, and even though the reader knows how the story must end, thanks to Angrboda’s gift of foresight, Gornichec manages to surprise.

Her pacing is tight, turning the domestic into adventure and adventure into quest, with the stakes mounting ever higher. The moments of happiness and peace are few and far between, and the reader longs for more. However, Gornichec understands that conflict drives plot. Her pacing never flags, and readers, unsatiated, will enjoy the bitter sweetness of the ending all the more.