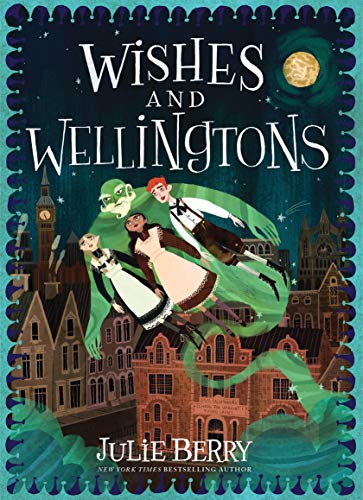 Maeve Merritt, the young hero of Julie Berry’s Wishes and Wellingtons, preempts any misconceptions readers might bring to the book by announcing, at the opening sentence, “I’ve always been too prone to solve problems with my fists.” With that clarified, the novel’s remaining 30-odd chapters find Maeve working out prospects for redefining herself. Factor in a contrary djinni, an orphan boy who equals Maeve in pluck, several determined schemers, and a string of close escapes, and Berry’s throwback of a story is likely to charm middle-grade readers, particularly those who prefer tales heavy with magic and mystery.

A boarder at Miss Salamanca’s School for Upright Young Ladies, 13-year-old Maeve bristles at life in an institution that punishes disobedience with whippings and extended stays in coal closets. This is Victorian London, 1896, and the staff at Miss Salamanca’s have long since run out of patience with Maeve—as have her parents, which is why she’s at the place. During one stint spent sorting the school’s trash as punishment for starting a fight, Maeve comes upon a sardine tin among the rubbish and, opening it, releases a green-skinned djinni. “From a tin?” Maeve wonders, and then considers: “Why not from a tin? These were modern times. They could put anything in tins these days.”

The chip on Maeve’s shoulder is undoubtedly large, and yet the djinni she unlooses—Mermeros is his name—outdoes her in pique. Constitutionally impudent, he’s outraged to find Maeve (a “hatchling girl”) is his master, though she’s equally put out by him. “(S)ocking my djinni probably wasn’t the best way to begin our friendship,” she tells herself when her initial startlement subsides. One of the delights of Berry’s story is the banter between Maeve and the ever-indignant Mermeros; the verbal sparring between the two rarely lets up. When Maeve wastes her first wish in a moment of impulsive revenge, however, she begins to contemplate the gravity of the gift she’s been given.

“Your wishes will destroy you,” Mermeros warns Maeve, who spends a fair amount of time probing the djinni about wish-making protocols and what it means to be his “master.” The answers give Maeve pause, both because Mermeros seems intent on outsmarting her, but also because she herself begins to wonder about the wisdom—the ethics, even—of exercising limitless power. The act of wishing, she considers, might bring out the worst in her, a fear that causes her to reflect on the sort of person she is.

Enter Maeve’s roommate Alice and an orphan boy named Tom (resident of the nearby Mission Industrial School and Home for Working Boys), whom Maeve enlists as allies as she contemplates how to use—or not use—her wishes. Alice, as loyal as she is timid, calms Maeve’s impulsiveness. Tom, who is at least as bold as Maeve while frequently sidestepping her condescension, excels at counseling prudence and getting the trio out of scrapes.

Threats to steal the tin arise from unexpected quarters, and Maeve and her friends do their utmost to stay a step ahead of those hoping to get their hands on her prize. Just when it seems Berry’s plot and the general thrust of the action will be straightforward, though, tracks shift and the story becomes steadily more magical, more tense—and more absorbing. Maeve finds herself reflecting on what it means to keep faith with her friends, and the tale expands beyond the fun-and-games of simple wish-making.

There is, of course, the thrill of magic throughout the book, particularly in a wonderful scene where Mermeros races the kids past the Eiffel Tower and into Italy and Cappadocia and beyond, a delightful 20-minute tour from England to Persia. A series of hijinks and escapades becomes occasionally exhausting, but the fun is always foremost.

Wishes and Wellingtons is a thoroughly old-fashioned story as well, in tone, pacing, and sensibility, something it’s easy to imagine a reader turning to a century ago after knocking off an E. Nesbit novel. “By what lamplight there was to guide us, it was plain to see that this once-grand home had suffered greatly for neglect,” Maeve narrates, when the trio enters an abandoned mansion. The word “ensorcelled” appears, surely an underused entry in contemporary middle-grade novels. It’s a sweet romp of a book (and look at that beautiful cover by star children’s book illustrator Chloe Bristol), and one with an enduring message: “(S)ome dreams coming true are more important than others,” Maeve explains. Easy to wish for a sequel.