The Wise Friend (Fiction Without Frontiers) 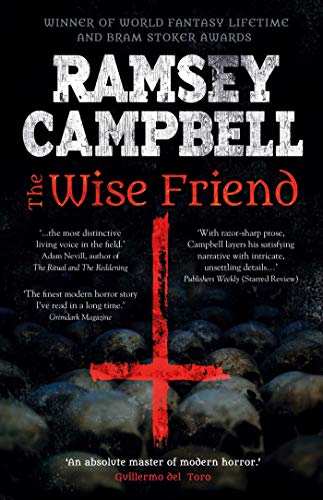 “The Wise Friend suggests more than shows. It is a slow-burning horror novel that hints at demonic activity without giving everything away until the very end.”

It is an old trope that artists have to be possessed in order to create amazing art. Robert Johnson, the man who helped to bring the Mississippi Delta blues to a wider audience, supposedly sold his soul to the Devil at some lonely crossroads at midnight. Satan also took the soul of Paganini. Ditto for Faust—the man at the center of the European ur-narrative of a sinister transaction done in the name of personal enlightenment.

Ramsey Campbell, the grim Liverpudlian scribe who has been churning out chilling stories since the 1960s, revisits the old supernatural chestnut of artistic possession in his latest novel, The Wise Friend.

Like all good horror stories, this one is about the past and how it refuses to remain the past. Before the beginning of the story, Thelma Torrington took her own life by jumping off the roof of a council house. Prior to her death, Thelma was a well-respected painter who trafficked in the occult. Her art reflected this darkness. One could even say that she was possessed by the gift of genius.

As the story begins, Thelma’s nephew, Patrick Torrington, is dealing with his own darkness. His former wife Julia has a cold disdain for him, and his son, Roy, is becoming a typically moody teenager. Things become even worse when Bella Noel enters the picture. After becoming Roy’s girlfriend, Bella begins to drag him and Patrick along on a bizarre quest to visit and take samples from a series of occult locations throughout Lancashire. Each one of these locations was previously visited by Thelma, who credited them with inspiring her. These journeys coincide with a string of mysterious deaths, two of which include members of the Torrington family. The deaths convince Patrick that not only is Bella at the root of it all, but that she might not be human in the first place.

The Wise Friend suggests more than shows. It is a slow-burning horror novel that hints at demonic activity without giving everything away until the very end. Even at the climax, after Roy, Patrick, and Julia have reached a kind of emotional contentment, there is still a lingering sensation of undefeated evil. After all, Thelma, who may or may not have summoned a witch’s familiar in order to create her outre paintings, is still present in her journal, which ends up in Patrick’s possession. Is the “true mage . . . conceived by the cosmos,” as Thelma’s words state, or, as the story suggests, can magic enter into our world without so much as a simple spell?

The Wise Friend makes the case for a more magical existence, but the most powerful incantations cannot save this thriller from being dull at points. There are large portions where nothing much happens at all besides a series of banal discussions. The story is written in such a way that it leaves open the possibility for Patrick being either psychotic or at least disturbed, and yet the ending makes a case for the opposite. All in all, The Wise Friend focuses a tad too much on Patrick’s disintegrating personal life and not enough on the bizarreness of Bella and her machinations.