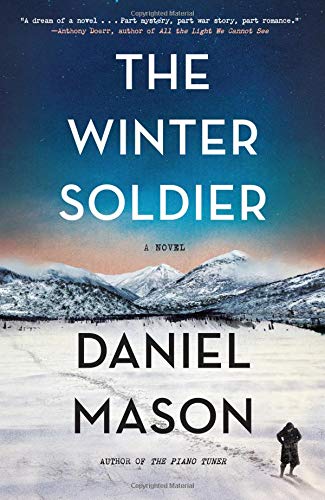 Love, loss and freedom take center stage in Daniel Mason’s The Winter Soldier. The novel chronicles the life of Lucius, a well-bred Polish-Austrian doctor from Vienna, beginning with his days as a medical student in the twilight of the Austo-Hungarian Empire; through his time as a doctor in a World War I field hospital; and finally to the post-war period as Lucius tries to put his life back together and find the woman he lost during the war.

The novel is laced with themes of freedom and restraint. This is first portrayed in Lucius’ struggle to study medicine against the wishes of his aristocratic-minded family. Even when he gets to school he is not allowed to practice medicine in any meaningful way.

During the war the constraint of movement keeps him from pursuing the love of his life. Restraint and constraint take various forms throughout the book, but the beauty is that they are never insurmountable. The adventure of watching the main character run into, then through or around obstacles, is part of what makes this novel so compelling.

Mason’s talent for detail and his medical background are evident from the very beginning of the story. This comes through in the intricacies of his scenes—from the elaborate military costumes of Lucius’ father to the opulent dinner his mother holds for Lucius in the midst of widespread starvation in 1917, the “tray loaded with dinner: cabbage rolls in tomato sauce and sour cream, a plate of blood sausage, potatoes spiced with marjoram and onion, pork sirloin in mushroom gravy. A row of dumplings, stuffed with duck.”

Mason also captures the nuances of human emotion in incredibly acute and perceptive ways. In a scene in which Lucius and a friend are studying microscope slides of brain tissue, he describes “the two of them pretend[ing] to see in the cells, the snakelike curl of envy, or desire’s glimmering curve.”

But unlike some authors, Mason doesn’t get bogged down with cumbersome passages of description. On the contrary, Mason’s details are so masterfully woven into the action of the text that the reader feels a part of the story, rather than like an outsider observing it. The novel races along on the back of descriptive passages, such as this description of the early days of war. “. . . the celebrations were hard to ignore. It seemed as if the entire city reeked of rotting flowers. In the city parks, errant streamers tangled themselves in the rosebushes, and everywhere, Lucius saw garlanded soldiers walking with beaming girlfriends on their arms.”

Lucius is sent to the front midway through his medical schooling. He is a prodigious student, but he is in no way ready for the horrors of war medicine—horrors that the reader gets to experience along with Lucius.

If there is one major criticism of the book, it’s that a few passages seem grotesque just for the sake of showcasing the author’s knowledge of medicine. Lucius’ first experience on the front is a good example of this, and it’s not for the faint of heart. En route to his post, Lucius meets a Hussar so infected with venereal disease that he hasn’t been able to urinate in several days. Lucius ends up helping the poor soldier out, but the reader may squirm when reading about the process.

Mason’s most compelling character is perhaps his most mysterious, Sister Margarete. Lucius, while fairly well versed in theoretical medicine at the time of his deployment, has never treated a patient. When he arrives in a remote medical station, there are no doctors and only one nurse, Sister Margarete. The Sister quickly realizes that Lucius has no experience, and takes it upon herself to teach and guide him in a way that is kind, effective and often funny. When doing rounds on the night of Lucius’ arrival in the field hospital, Margarete introduces a soldier who had tried to talk to her about the theory of evolution, which she obviously disapproved of. “This is Redlich, a professor in Vienna. He believes a monkey gave birth to a human woman . . . A monkey, Doctor, can you imagine? Anyway, he was shot by Cossacks. In the rear. Next to his tail.” Indeed, it is a significant accomplishment that Mason is able to bring a level of humor out in characters so immersed in the pain and suffering of war.

There is a love story at the center of this novel, but it doesn’t develop until almost the middle of the book. That affair is well placed, as it changes the feeling of the story, and sets the narrative on a path of several unexpected twists and turns.

Almost as soon as Lucius finds himself in love, he is wrenched apart from the one he loves. His redeployment and eventual return to Vienna compound his heartache. He buries himself in his work and eventually struggles through a short but nasty marriage, brokered by his well-meaning mother. But even here, we see Mason’s sense of balance—Lucius’ wife, while far from enchanting, is portrayed as human, and it’s their incompatibility rather than either individual’s faults that end the marriage.

The end is surprisingly satisfying. Without going into enough detail to spoil the story, Mason crafts a beautiful finale in which the reader is forced to evaluate the balance of a love affair that is impossible and the freedom that comes with ultimately letting go of an obsession.