This Will Be Funny Later: A Memoir 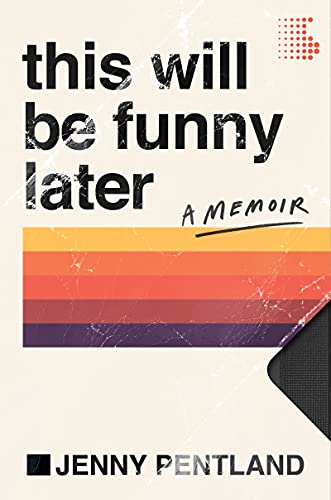 “‘I dedicate this book to everyone who helped create its contents in any way, including the assholes.’”

“I dedicate this book to everyone who helped create its contents in any way, including the assholes,” is a preview of what’s in store for the memoir, This Will be Funny Later by Jenny Pentland, the daughter of one of America’s pioneer  feminist comics, Roseanne Barr. The apple doesn’t fall far from the tree . . .

Pentland, who has two older sisters and two younger brothers, believed—against society’s norms—that she was programmed, from birth, to procreate. “I was a born breeder.” She has five sons. Her father, Bill, was a postal worker whose family were Lutheran, while we know her mom, Roseanne’s, were Jewish.

Pentland, early on, had a “sixth sense” that her mom would one day be famous, and they’d leave their working-class neighborhood in Colorado. After her mom got a job as a cocktail waitress, she tried out for a comedy club and was well-received. The family moved to Los Angeles where it soon became clear Roseanne would succeed.

Roseanne appeared on the Tonight Show in 1985, while Bill shuffled the children back to Denver for the school year. Soon they all made the move to L.A. Summers, the kids were shuffled back to their grandma’s (“Bubbe”) in Utah where diets were thrown out the window, leading to eating disorders and kids’ diet camps. “A favorite snack of mine was granulated sugar.”

The family were fish out of water. With each success, “we were basically the Beverly Hillbillies.” Then Mom’s TV series made it big and nothing was the same for the Barr-Pentland family. Sis Jessica became a teen rebel, and Jenny struggled with weight at summer fat camps. Roseanne’s out-of-wedlock daughter, Brandi, was discovered by a rag-mag.

During one of numerous institutionalizations, older sister, Jessica, OD’d, and Jenny was sent to yet another wilderness camp. Focused with one goal, “Those daydreams of a monotonous life of diapers and dishes kept me alive.”

Eventually, both Jessica and Jenny graduated from their various institutions—Jessica at 19 and Jenny at 18. Roseanne divorced Tom and hooked up with her bodyguard, Ben Thomas. During a family trip to Europe, “I . . . tried to lock eyes with any man who might want to be gifted the privilege of dicking-down a newly legal plus-size queen.”

After fertility treatments, 40-ish Roseanne became pregnant with Buck and married Ben Thomas—to whom she remained married for eight years. Having reached 280 lbs., Jenny consented to gastric bypass surgery. She obtained her GED, had a brief gig at a funky bookstore, quit, and became promiscuous. After all, she claims, “The Pursuit of Dick is our mission, nay, our calling.”

Jenny met Jeff, who was her brother Jake’s, best friend. They took Kabbalah courses, and at 23, she became both anemic and pregnant. A shotgun wedding in Vegas was followed by the birth of Eitan.

Baby number two, Cosmo, was conceived during a Maui family vacation, and then, 15 months later, came Otis. Roseanne bought a 40-acre macadamia nut farm in Hawaii, and Jenny and family became caretakers in 2008, when she was pregnant with baby boy number four. She didn’t have a good relationship with money, and “wanted a simple life free from the complications of success.”

Buster was born in 2009. After four kids, Pentland had a breakdown, was diagnosed with PTSD and entered therapy—however her therapist relocated after six months.

Eitan graduated high school in 2018, sadly at the same time his granny, Roseanne, was booted from TV and Twitter for what was deemed a racist rant. Hubby Jeff had a breakdown, Pentland landed a book deal, she became pregnant (with baby number five, Ezra), and COVID hit. Stress?

Pentland has a snarky gift of words. Clearly, Pentland, who could have easily filled a lengthy memoir by the time she was a teen, wisely waited until now for this gem. This Will be Funny Later—the best memoir this reviewer has read in many years, is a biting, bittersweet, and absolutely brilliant MUST-READ, chock full of life lessons. JENNY PENTLAND, YOU ARE A SUPERHERO!