The Widowmaker: A Novel 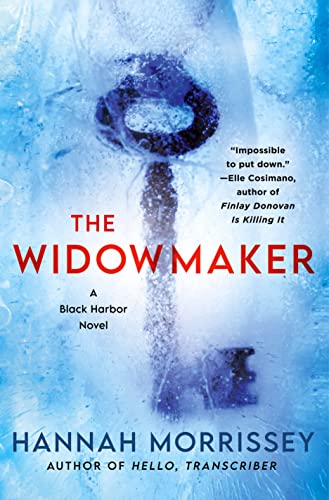 “From the beginning Morrissey designs numerous situations through foreshadowing, red herrings, and solid clues calculated to grab the reader by the neck and not let go until the end of the story.”

Hannah Morrissey’s new novel The Widowmaker is a little confusing at the outset. That is not to say she doesn’t open with a good hook, it just takes a few chapters to get the gist of the story.

In laying out her premise, Morrissey twists the story around several times when she alternates points of view, dedicating each chapter to one then the other main character. This technique is very effective in strengthening the plot.

Morrissey’s protagonist, Morgan Mori, is a dark character and it takes some explaining as to why that is. A young woman with a troubled history, Morgan is searching for herself. Her mother died when she was a young child, and she was put in the care of an older relative who passed her around to strangers until she was adopted by another family. Her father is unknown.

Her life begins to shrivel when a business she owns is burned to the ground, and the only thing she has is a mysterious note drawing her back home and a key. She wonders what these items mean.

When Morgan moves back to her home city of Black Harbor to search for her identity, two things occur that will force her to dig deeper into who she is.

She is a photographer by trade and is invited by a wealthy local family to photograph their Christmas party. The Reynolds family has had its own share of disturbing events; the father disappeared 20 years earlier and the case has gone cold—very, very cold.

After this party, she is witness to the killing of a local police officer, Garrison, at a convenience store where her car and photography material are stolen by the murderer. The officer’s partner, Ryan Hudson, is bereft at the loss of his friend and mentor and determined to find the murderer and bring them to justice. But because of his relationship with his partner and the fact that another police department has jurisdiction, he must take his investigation underground.

As the story develops from here, it becomes clear that Morrissey has a number of twists and turns up her sleeve. The relationship between the Reynolds cold case and Garrison’s murder moves closer and closer to becoming one mystery, and both Hudson and Morgan are drawn into it.

Morrissey is very good at creating her primary characters and giving each a history that becomes clear without a lot of backstory. In particular, her development of Morgan is intriguing. She is a character who is not a very nice one as the story opens, but this draws the reader in, and as the story progresses the reader begins to develop a rapport with her.

In the same respect, Hudson’s personal history deepens as it becomes clear that there is a personal darkness to him that the reader does not expect until the facts begin to rise to the surface.

The reader determines that these two characters are meant to be together through the collision of two mysteries that soon become one. Morgan considers this situation, “Of course, she’d already told Hudson most of everything, but that was different. They’d been alone, and he was like her. Strange. Adrift. Misfit. He wouldn’t throw her in an institution . . .”

From the beginning Morrissey designs numerous situations through foreshadowing, red herrings, and solid clues calculated to grab the reader by the neck and not let go until the end of the story. Although the first two chapters seem, at the outset, to be disconnected, she cleverly ties up the loose ends.

Bigger than a cozy, a real page turner.