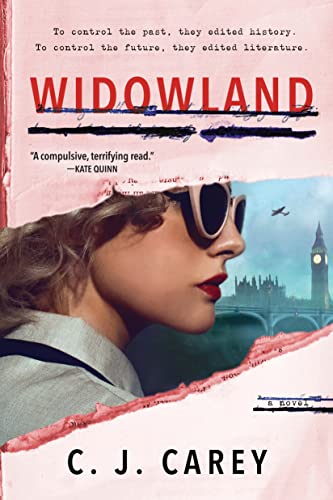 C. J. Carey’s novel, Widowland, couldn’t be more chilling—or dystopian—given the frightening political landscape confronting women in America and elsewhere.  It is an important, and well-written book for our time.

Released in the U.S. prior to midterm elections, the novel can be viewed as a story in which The Handmaid’s Tale meets Fatherland, Robert Harris’s 2006 alternative historical novel. Those novels and now Widowland sound alarm bells about how totalitarian regimes gradually come to power, oppressing and terrifying people forced to live in countries ruled by deranged dictators.

Like Fatherland, Carey’s novel involves a conspiracy against Hitler, who in Widowland has conquered the United Kingdom in World War II and is now “Leader” of a country that destroys any semblance of human rights or autonomy. It also despises women. The Handmaid’s Tale is set in a similarly destructive, cruel, repressive regime that also hates women, some of whom ultimately outsmart the monstrous males who wish to enslave them. All three of these novels are tales of courageous resistance and female agency. What Carey adds to the mix is the power of literature as a means of resistance.

The central character in Carey’s story is Rose, an intelligent, sensitive, well-educated, and beautiful young woman who was a teenager when the Reich succeeded in conquering Great Britain. That happened 13 years before the novel begins, but Rose, although heavily indoctrinated into totalitarian principles and rules, still vaguely remembers “The Time Before.” Yet she falls into line and becomes one of the class of women who are recruited to work for the Nazi government. She even has an affair with Martin, a senior government official, a ticket for women like her to achieve a level of safety and higher rations.

Rose works in the Ministry of Culture and is tasked with editing novels written from The Before Time because they are deemed dangerous, including the classics of western literature. Thus she is exposed to the works of great women writers from Aphra Behn to Charlotte Bronte, George Elliot, and beyond, all of whom inspire her to think and ultimately to write secretly.

In the course of her work and her affair, Rose mingles with the higher male members of government’s hierarchy.  On one assignment she also meets a group of women who have been banished to one of the ghettos in which widows and those without progeny are assigned. These women, many of whom were formerly professional, high achieving members of society, are considered useless. They live impoverished, marginalized lives behind barbed wire with insufficient rations. Their extinction looms as a possibility. Still, they soldier on. The ones Rose meets change her life.

They also enrage Martin, whose views are shared by other Gestapo administrators. The women “are known to be keen on reading,” he tells Rose. “We regularly lock them up for flouting every goddamn regulation that exists regarding literature. . . . We’ve picked plenty of them off for that.”

Are these women linked to proliferating literary-inspired resistance graffiti painted on building walls across the country?

The graffiti slogans, many excerpted from or inspired by long-gone women writers, move Rose to write compulsively. “The wall that she had built so carefully in her mind, brick by brick, to stand between her thoughts and her words was beginning to crumble,” Carey tells readers.

In a conversation with a male colleague whom she trusts Rose reveals that she is writing. He helps her understand why she is driven to write, despite the risks. “The party hates writing for the same reason they hate reading. Because it involves being alone, in contact with an unfettered human imagination. That’s why they fear it. . . . By writing we preserve our brief snatch of life. Like placing a star in the darkness of the past.” In such passages, Carey reveals her own commitment to writing, and to exploring the darkness of the past.

Carey also astutely articulates, via her characters, her concerns about the fragility of democracy in our own times. In another conversation between Rose and the man she trusts Rose reveals her father’s warning about the regime under which they now live. “I thought he was overacting,” she says, to which her companion replies, “The authorities couldn’t believe how smoothly it went here. They expected a long, hard-fought resistance, and instead found the population was mostly placid. Compliant. People liked the idea of a strong leader. . . . What they wanted was a quiet life.”

Readers must be grateful for writers like Carey whose carefully crafted story sounds alarm bells. At the same time, they must hope that Widowland remains a warning and a call to action, and that ultimately it does not prove to have been prescient.