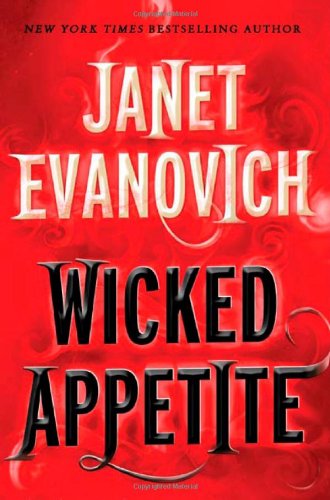 Lizzie Tucker, a pastry chef, bakes cupcakes at Dazzle’s Bakery in Salem, Massachusetts, home of the infamous witch trials. She’s quite content with her life, working for Clara Dazzle—rumored to be a bit of a witch herself—and with counter girl, Glo Binkly, a wannabe witch who constantly casts disastrous and comical spells.

Lizzie’s life changes the day two men enter the store. First to visit is Wulf, a handsome, vampire-like man who later exits in a billow of dark smoke. Then Diesel seems to appear out of nowhere, a six-foot hunk of a man with dark blond hair, appraising eyes, and a moody demeanor.

Diesel is looking for his evil cousin, Wulf. He realizes Wulf’s been there when he notes a slight burn on Lizzie’s hand—Wulf’s work. Diesel decides it’s his responsibility to protect Lizzie from Wulf, and never leaves her side; including her bedside. Lizzie’s protests go unheeded—and truth be told she does feel safer with Diesel around, even if he can be a grump at times.

Janet Evanovich, New York Times bestselling author of over 24 books, including the popular "Stephanie Plum books,” has written a hysterically funny new series. This first book, Wicked Appetite, will cause readers to laugh out loud at the near slapstick antics of this modern day quest to save the world.

Glo Binkly, late for work as always, adds a one-eyed, mind-reading, rescued Cat7143, a possible ninja, as well as Carl the monkey to the mix—an explosive combination. Of course Glo cannot keep these rescued animals, so Lizzie’s house is overrun by strange characters—both animal and perhaps human, as the vote is still out on Diesel, who claims to be an Unmentionable. He works for BUM, an organization that stops other Unmentionables like Wulf from abusing their powers. Poor Lizzie proves to be an Unmentionable too, but only as the best cupcake baker in the world; although she becomes a Glutton when around certain empowered objects and can’t stop eating.

Diesel is searching for certain charms which form a puzzle pointing to seven stones representing the seven deadly sins, guarded for 1000 years by an arcane cult—before Wulf discovers them.

Shirley, a long time patron of Dazzle’s famous cupcakes, is spied chasing off two men trying to abduct her. Being a rather large, hefty woman, she cold cocks one of them and escapes to her home. Glo has joined Lizzie and Diesel as the witchy trio uses a cupcake deficit to lure Shirley into letting them into her home—which Diesel suspects of holding a part of the puzzle. Glo tries to help get information from Shirley, but her spell goes awry (as do all her spells), and now all that comes from Shirley’s mouth is gibberish. Making matters worse, Lizzie is reacting to something in Shirley’s house and is Gluttonous enough to eat herself sick. She devours almost all the cupcakes, which angers a babbling Shirley.

This book is a page-turner mainly because it’s so outlandishly comical that there is no place to stop reading. It’s as if Erma Bombeck collaborated with J. K Rowling in writing a fantasy tale.

Some of the more outrageous quips border upon the ridiculous, but author Evanovich doesn’t give the reader time to complain as she steers the book toward more capricious capers. It’s funny from the first page to the last, including the scary, mysterious scenes. The repartee between Diesel and Lizzie is jocular and witty, sometimes slowing the chaotic pace enough for the reader to catch a breath and relax—but not for long.

Fans of Janet Evanovich, as well as new readers, are certain to enjoy this rollicking first book of her enchanting new series.