Why We Lost: A General's Inside Account of the Iraq and Afghanistan Wars 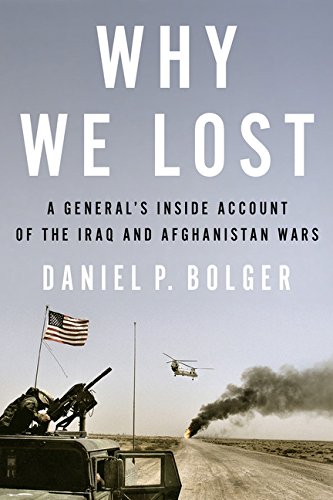 “Volumes such as this one can help inform and shape the debate that will hopefully move beyond partisan fallout and examine these wars more methodically.”

America will soon end the longest war in its history. When the last American combat troops come home from Afghanistan in 2014, over 13 years of conflict will close in Iraq and Afghanistan. But were these campaigns successful? And if not, why not?

These are questions that Lieutenant General (LTG) Daniel Bolger, U.S. Army (retired), professes to answer in this new and controversial book. Drawing upon his 35 years of service and experience as a published military historian, LTG Bolger tries to provide an even-handed insiders account of how the military and political leadership of the United States managed (or mismanaged) these conflicts from both a strategic and tactical perspective.

This book is not an autobiography or typical memoir. Instead LTG Bolger attempts to blend narrative history with analysis to show how soldiers and Marines struggled with the challenges of counter-insurgency (COIN) and nation-building under trying circumstances, often with conflicting guidance from higher headquarters.

One of the definite recommendations for this book is that LTG Bolger tries to write a comprehensive view of Iraq and Afghanistan as two campaigns in the so-called Global War on Terror, something myriad unit and personal memoirs previously written by soldiers and politicians do not. Hopefully this much needed trend of examining these two campaigns holistically will continue in the future.

LTG Bolger uses snippets of selected tactical engagements to emphasize his larger themes, requiring the reader to be able to read between the lines to determine the particular point he is trying to make. This can lead to some challenges for the reader looking for a straight-forward analysis of what he thinks went right and wrong in these conflicts.

Yet careful reading makes brings out three main theses. First, like all military men of his generation with experience in Somalia, the Balkans, Iraq, and Afghanistan, LTG Bolger does not believe the military should be involved in armed nation-building. His examples of troops at the company level attempting to be soldier, diplomat, and humanitarian all at once show that the military is not well suited for the sort of long-term effort needed to rebuild a failed state.

Second, and directly related, he states pretty clearly that the United States completely misread the nature of both Iraqi and Afghan societies, attempting to export multi-party liberal democracy using military power to countries built completely around tribe, clan, and sectarian ties. The inability of most Americans in the diplomatic and political class to grasp that these societies were not going to be liberated from their past ensured years of frustration and toil for the U.S. military.

This is probably his most emphatic message: that the U.S. had unrealistic and unobtainable goals to remake Iraqi and Afghan society into something that socially and culturally was unachievable. The high-minded vision of the Bush Administration to bring freedom and democracy to societies that frankly had no notion or experience with what those ideals meant, and no desire to change hundreds of years of societal construct, put U.S. forces on the ground in an untenable situation.

For most of their time in Iraq and Afghanistan, U.S. troops were challenged to separate friend from foe where it seemed to the grunt doing endless foot patrols in hostile neighborhoods and villages that everyone hated the infidel invaders. This was particularly true in 2006 Iraq, when the country essentially descended into a Sunni-Shia civil war with U.S. forces caught in the middle and shot at by all sides.

One area he touches on but does not fully develop from an operational perspective is the effort by U.S. military leadership to replicate the Iraqi surge of 2006-2008 in Afghanistan from 2010–2011. This was certainly a misguided notion, as the Iraqi surge only succeeded when the Sunni tribes in Anbar Province got tired of Al Qaeda foreign fighters interfering in their smuggling business and challenging traditional tribal leadership and began supporting the American efforts while receiving a heavy flow of largesse. There was never going to be a corresponding change in loyalty among the Pashtun tribes supporting the Taliban, essentially short circuiting any long-term benefit from American efforts during the so-called surge in Afghanistan and almost ensuring a resurgence of the Taliban after 2014.

One of the most telling issues LTG Bolger describes is the very convoluted “rules-of-engagement (ROE)” that determined when U.S. forces could engage insurgents, and how much firepower they could use. Particularly in the later stages of the Afghanistan surge that began in 2010, these rules were so restrictive that U.S. soldiers could not engage Taliban forces they had in their sights because the Taliban also knew the ROE and deliberately hid behind women and children to allow free movement to organize attacks against isolated U.S. outposts.

Finally, LTG Bolger seems to be in the camp that believes COIN is not a suitable mission for America’s conventional military forces. His analysis of the early campaigns in Iraq and Afghanistan provide a glimpse into his view that the U.S. military is best used for a quick conventional campaign to inflict a decisive defeat on an opponent and then should be withdrawn.

Clearly a fan of the Powell Doctrine, he notes that U.S. forces often had to try and achieve a moving set of campaign objectives, leading to each new theater commander introducing his vision of COIN, leading to confusion, dismay, and an eventual cynicism among the junior officers actually trying to achieve these objectives.

The effects of these wars on the Middle East, American foreign policy, and our national security strategy will continue to unfold for the rest of this decade and beyond. Volumes such as this one can help inform and shape the debate that will hopefully move beyond partisan fallout and examine these wars more methodically.

Although the narrative history was well written and LTG Bolger does a good job of weaving snippets of analysis into the narrative flow, given his purpose of stating why America “lost” these wars and his mea culpa in the introduction of being one of the generals who helped lose the war, some more definitive lessons or at least some recommendations would have provided a more satisfactory conclusion.