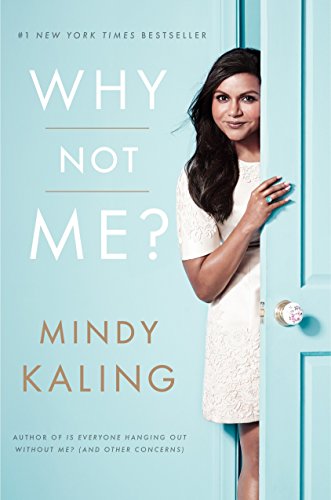 Common wisdom has it, I think, that, word for word, quip by quip, writer/producer/actress Tina Fey is our leading candidate for modern-age version of Dorothy Parker.

But with her new book Why Not Me?, Mindy Kaling should have us all reevaluating our opinions.

Rarely—perhaps not since Fran Lebowitz abandoned her day job as a writer and instead adopted a New York nightlife that includes wearing a man’s tuxedo from the moment the sun goes down and simply saying sardonic comments instead of writing them down in slim volumes like Social Studies and Metropolitan Life—has anyone published as textured, wry and, well, biting a comment as this:

“Who is the beauty icon that inspires you most? Is it Sophia Loren? Audrey Hepburn? Halle Berry? Mine is Nosferatu, because that vampire taught me my number-one and number-two favorite beauty tricks of all time: avoid the sun at all costs and always try to appear shrouded in shadows.”

Which is, as modern-day snarkish comments go, more or less worthy of Ms. Parker.

Tina Fey, of course, has given us years of pleasure on SNL, most especially when impersonating Sarah Palin, both wrote and acted in the film Mean Girls, created and starred in the sitcom 30 Rock, wrote the book Bossypants, and turned the world in with her smile when seemingly effortlessly co-hosting, with Amy Poehler, The Golden Globes.

Kaling, for her part, first came into the spotlight in the 2003 Off-Broadway show Matt & Ben, in which she played Ben Affleck (a role she tackled because “we have the same color hair”) opposite her co-author and co-star Brenda Withers as Matt Damon. From there, she went on to appear in and write for the acclaimed American version of The Office and then proceeded to create her own sitcom, The Mindy Project. She has appeared in films like The 40-Year-Old Virgin. And she has also done Fey one better by authoring two books, Is Everyone Hanging Out Without Me (And Other Concerns) and the present volume.

But sheer output isn’t everything, of course. Quality counts.

And the quality of the writing in her new book sets Kaling apart from all the other humor books flooding the market. From the first page onward in Why Not Me? Mindy Kaling shows an authorly promise of better and deeper things ahead.

In the books first chapter, “Hello Again,” Kaling writes of changing schools in the seventh grade, and of the strategy she adopted to win new friends. She brought with her into the new school’s homeroom a family-sized bag of Skittles and asked the other students whether or not they liked them. If the other children nodded, she said to them, “Here take some. I’m Mindy!”

Whether or not conversation was engaged and a friendship born, Kaling continues to act “like a middle school Hare Krishna” until her art teacher Mr. Posner called her aside to say, “You don’t have to give people candy to like you, Mindy, they will like you . . . for you.”

“I nodded meaningfully, knowing he wanted to see that my mind had been blown by his humanity. Then he took my Skittles and I thought, what a load of garbage. At twelve years old, I had experienced enough to have zero faith in the power of my looks or my personality to reel in the friends I wanted so badly. I needed my Skittles. The next day I brought in some more, and Mr. Posner called my parents. The Skittles stopped, and I wished that Mr. Posner was trapped in the bottom of a well, and later killed like in Silence of the Lambs. . . .

“As I got older, I got craftier and less obvious, but I’ve always put a lot of energy and effort into people liking me. That’s why I’ve never understood the compliment ‘effortless.’ People love to say: ‘She just walked into the party, charming people with her effortless beauty.’ I don’t understand that at all. What’s so wrong with effort, anyway? It means you care. What about the girl who ‘walked into the party, her determination to please apparent on her eager face?’ Sure, she might seem a little crazy, and, yes, maybe everything she says sounds like conversation starters she found on a website, but at least she’s trying. Let’s give her a shot!”

The sounds of Skittles dropping from the family-sized bag into the hands of readers everywhere echo throughout the pages of Why Not Me?, giving special meaning both to the various loosely connected essays that comprise the volume, and to the book’s title as well. “Why not me?” seems, to Kaling, almost a mantra, and most certainly her life’s overriding complaint.

All of which is dandy source of comedy. Like this bit about fame:

“When I was on The Office, I was the perfect kind of famous: a little bit famous. Double-take-at-the-airport famous. Occasionally someone would come up to me and excitedly say, ‘That’s what she said!’ and I would smile knowingly and respond, ‘Steve’s great, isn’t he?’ implying that Steve Carell and I are very close friends who vacation together.

“Now things are a little different. To clarify: I’m by no means famous-famous, like Rihanna or a Kardashian or Nicki Minaj’s butt. Those are people who have to wear makeup when they exercise, which is a whole other tier of fame.”

In any medium, Kaling has the gift of spinning gold out of insecurity, especially where her own looks are concerned, as well as the ability to make the outsider’s viewpoint universal. But as gifted as she is in front of and behind the camera, it is on the printed page and her talents are best served.

Of all the various essays, commentaries and chunks of memoir—some hits, some misses, honestly—the best-in-volume belongs to “A Perfect Courtship in My Alternate Life,” a perfectly on-target oddball romance between two teachers at New York’s prestigious Dalton School. In it, Kaling shows such skill for narrative and such a slick ability to create characters that her next book must surely be a perfectly observational short novel or a brilliant new play, either one born from the proud American tradition of comics turning into artists, like Steve Martin’s Shopgirl.  Or, like the aforementioned Dorothy Parker’s superb play, The Ladies of the Corridor, which was written with Armand D’Usseau just as Kaling co-authored in the past as well.

Until then—until her terse novel and its even more terse film adaptation are completed, we have Why Not Me? a humor book just about as good as a humor book can be.

As here, the bit I will leave you with:

“I am influenced by a societal pressure to be thin. All the time. I feel it the same way anybody who picks up a magazine and sees Keira Knightley’s elegantly bony shoulder blades poking out of a backless dress does. Honestly, I’m dubious that any part of my body could be so sharp and firm as to be described as a ‘blade . . .’”