Why Didn’t You Just Do What You Were Told?: Essays 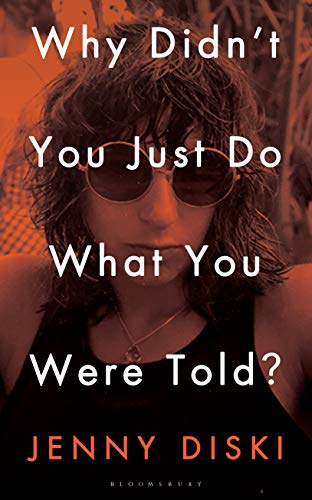 “Jenny Diski is an absorbing, savagely witty, insatiably curious, and gifted writer. She is direct, unafraid, and full of surprises.”

If you are drawn to Edward Hopper’s paintings, you will love the essays of British writer Jenny Diski (1947–2016). But beware: The 32 long-form essays collected here, written over a period of 25 years for the London Review of Books, are often very personal, and hence exceedingly dark.

Diski grew up in a dysfunctional home. She had a suicidal mother. Her con man father abandoned them. The author herself was abused, suicidal, and often resident in psychiatric hospitals.

Light-hearted essays these are not.

Fortunately, Jenny Diski is an absorbing, savagely witty, insatiably curious, and gifted writer. She is direct, unafraid, and full of surprises. Her intelligent essays on wide-ranging topics (from childhood memories to Stanley Milgram’s famous study of obedience) will leave readers wondering why they have not been aware of her. Why Didn’t You Just Do What You Were Told? is a splendid introduction to her nonfiction (she wrote 10 novels) and may well lead smitten readers to the author’s works of travel and memoir, like Skating to Antarctica, which originated here.

Diski once told an interviewer: “What I really want is to be on a boat for a very long time without anyone else on it. But then I’m not a sailor, so that’s a problem.”

Perhaps for her, but not for readers. Often couched as book reviews, her pieces all seem to stem from a singular, solitary place where she is asking fundamental questions about life and living.

“Is it useful for you and me, with no more than a window-shopper’s interest, to know about Jeffrey Dahmer?”

“What made Howard [Hughes] run? Was it that wicked Uncle Rupert who sodomised young Howard?”

“I’m going to hang on to Keith Richards’s autobiography, because sometimes I worry that I lead a boring life and wonder if I shouldn’t try harder to have more fun. When that happens, a quick flick through Keith’s memoirs will remind me that I’ve never really wanted to live the life of anyone else, not even a Rolling Stone.”

“The sound of my parents fighting in our two-roomed flat on the third floor echoed through the corridors of Paramount Court, my father leaving several times, my mother being stretchered away to hospital, the furniture and fittings being confiscated by debt collectors when we were on the fifth floor; these were all public events, but somehow, it was assumed, I wouldn’t retain a memory of those things. Adults experience, children don’t.”

Her topics include ageing, murder, office work, Christine Keeler, Richard Branson, Anne Frank (“the only Jewish saint”), fear of spiders, sleep, doing nothing, the “Titanic experience,” and buying new shoes with a government voucher. In each case her writing is sharp, precise, and filled with observations that will resonate with many readers.

She explains how Martha Freud provided “a peaceful home life” for her husband Sigmund; how Elisabeth Nietzsche created the “Nazi philosopher” reputation for her brother Frederick; and why children love Roald Dahl’s stories (“They speak to the last overt remains of the disreputable, unsocialized, inelegant parts of themselves the grown-ups are trying so hard to push firmly underground.”

Her life as the only child of working-class Jewish immigrants is frequently a focus. “My mother was a woman whose behavior was often inexplicable,” she writes. “Living with her, day by day, was like skating on newly formed ice. It constantly shattered, every day. But there was no alternative, no other place to go.”

Enter Doris Lessing. For three years, at the urging of her son, the famous author of The Golden Notebook, took the teenage Diski in. Serving as a mentor, Lessing provided a more stable environment and covered therapy costs for the teenager. Diski discusses the period in her book In Gratitude.

In her review of The Last Asylum, a memoir in which historian Barbara Taylor details her many years as a mental patient, Diski compares their experiences and declares: “I should have been MUCH madder than I was. I haven’t been NEARLY mad enough.”

Here and elsewhere in this collection, her intelligence and winning fierce honesty are bound to snare many readers.