Who Will Die Last: Stories of Life in Israel 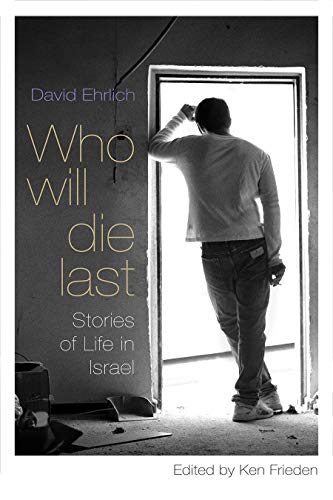 David Ehrlich’s short stories, some of which describe the lives of both openly identified and closeted Israeli gay men, are sometimes funny, sometimes sad, and sometimes both. They tend to be rather short and have been compared to Etgar Keret’s short, humorous, slice of life vignettes. But Mr. Keret’s stories are universal and could take place anywhere, while Mr. Ehrlich’s have a strong sense of place with characters that are unmistakably Israeli.

One of the funniest stories is “Sol Popovitch’s War” whose eponymous character is a Jewish-American billionaire philanthropist who, tired of funding soft projects in Israel, decides he wants to fund the IDF directly. The suspicious army generals direct him to the air force, which offers to name a hanger for him. Mr. Popovitch insists his name appear not only on the hanger but also on every airplane, just as his name appears on every ambulance he donated to Israel’s equivalent of the Red Cross.

Negotiations continue almost in the manner of Borscht Belt shtick, and much as the generals want the military hardware Popovitch is willing to donate, they also consider him a nuisance. They propose naming a base in the Sinai after him that Israel is scheduled to return to Egypt in a few years. In the end they agree to name the next war after him, and a period of prolonged peace ensues.

In the sad stories characters experience loneliness and isolation in an acutely Israeli way (since Israelis tend to crave connection). In “Utterly Nameless” a man meets his now married ex-girlfriend and realizes that since their breakup she’s completed her doctorate and started an academic career and a family whereas his life is comparatively stunted.

Some of the gay and bisexual characters are in the process of accepting their sexual identity. In the book’s longest story, “On Reserve,” the first person narrator, a reserve officer married to a woman, adopts the habit of leaving for reserve duty a day early, checking into a hotel near the army base, and picking up a man at a gay cruising spot and spending the night with him. When he meets a man who wants more than just sex our narrator begins to question whether he is still also attracted to women.

“On Reserve” also has the only reference in the book to Israel’s conflict with the Palestinians when the narrator notes that the soldiers he commands prefer service in Israeli occupied southern Lebanon to service on the West Bank during the second intifada.

In “Keeping Kosher” an openly gay character is frustrated by the lies his closeted partner tells nosy strangers to hide the nature of their relationship. The theme of Israeli social intrusiveness is also explored in “Lilly,” a story about a coffee shop whose customers discover that it isn’t the lousy coffee or the nearly stale pastries that draw them to the place but the smile of the barista of the same name when she fails to show up one day. When the café owner fires her, the customers negotiate a truce between Lilly and her boss to bring her back.

The title of the book is also the title of its darkly humorous last story, which consists entirely of a reality television producer pitching program ideas to a network executive. It’s a good title for the story but a misleading one for the book, which is in no way as grim as the title suggests.

It is also unfortunate that major commercial publishers have passed up the opportunity to publish this book. Kudos to Syracuse University Press for publishing it; it is hopeful that Who Will Die Last can reach the wide audience it deserves.