The White Road: Journey into an Obsession 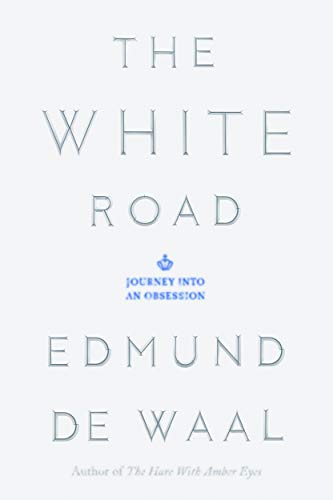 In a blend of history, memoir, and travelogue, renowned ceramicist Edmund de Waal invites readers, artists, art critics, and the curious into his obsession with clay and its beauty from its genesis in the earth to its formation at the hands of a potter into something utilitarian and beautiful.

De Waal interestingly points out that an object's life is never done, even if the item is no longer being used as it sits in a museum or picked up by hands, because to another set of eyes the item is re-birthed in imagination as something else, perhaps something the item never was.

Author Edmund de Waal is a poet, his short paragraphs are works of prose poetry as carefully crafted as one of his beautiful vases, and the white spaces between paragraphs, as well as the blank pages of this book between chapters, reinforce the white road traveled by de Waal and readers. In each new section, among the blank pages, Mr. de Waal places a faithful and beautiful image of a mark found on the bottom of porcelain piece. The White Road is put together in thoughtful sequence like a New York gallery exhibition. Regardless of a reader's understanding or familiarity with porcelain or pottery, de Waal carefully and thoroughly explains the philosophical and the practical.

Readers will go on a pilgrimage with de Waal as they travel through the many pottery factories of China, of which one day even he has suffered enough in Jingdezhen; Versailles, where Mr. de Waal seeks the history of the Jesuits and porcelain in Louis XIV's court; Dresden, where readers learn about the alchemists and the obsession of Augustus II with porcelain; Plymouth, England, the third place worldwide to produce porcelain 1,000 years after China; and North Carolina, home of Cherokee clay. Readers will enter the halls of the Basilica di San Marco in Venice with de Waal and his son in search of a five-inch jar Marco Polo once wrote about, and they will join him in his cramped London studio among his several assistants hired to help glaze and fire pieces.

Though there is a list of illustrations cited at the back of the book, there is, disappointingly, no index, which would make The White Road into a greater text, serviceable for scholars and art historians into the study of porcelain. Because this is part memoir, de Waal doesn't cite his sources, and sometimes he doesn't offer explanations, not just for what he knows, but for what he does (for example, why he uses his son to enter the Basilicia di San Marco). He states things he may know as historical fact, and which may very well be true, but readers will have to look up to verify this information (if they are diligent scholars) or accept this information as fact. Truly, this is the book's greatest weakness.

Much like a piece of clay pulled too thin on the potter's wheel can easily break and pull away, a reader's attention may also crack and disappear in this paen to porcelain. The average reader likely won't stick with the obsession, though there is much to learn within the pages, but readers who revel in another's utter delight with a singular subject will be thrilled with de Waal's book.