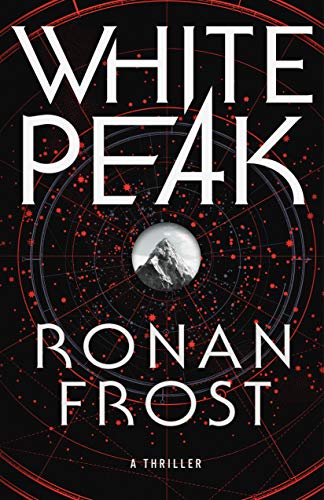 “A tale of a discovery no one expected, chilling not only because of its location, but because of the consequences it may hold for the world in general, White Peak will hold the reader in its grasp long after the novel is finished.”

Ryerson McKenna is suffering from survivor’s guilt. He was on the phone with his wife Hannah when she was gunned down in a mall shooting.  Instead of guiding Hanna to safety, Rye inadvertently directed her into the line of fire. Now her last moments, heard over the phone, haunt him.

Rye gets his chance for revenge, but afterward he’s still torn by his loss.  Now, however, he’s getting a second chance, courtesy of one of the world’s richest men.

“The man put an envelope on the counter.

That is the question Greg Rask asks. Rask has spent his life trying to help people, a true philanthropist.

“There weren’t many men like Greg Rask in the world.”

He also has a hidden agenda. Rask is dying, and he’s attempting to find a cure, courtesy of a fabled treasure. Sought by men through the centuries, including the Ahnenerbe, the occult division of the SS, there are three stones, the cintaman, whose combined powers can heal not only himself but others.

The stones are rumored to be in the lost city of Shambhala, perhaps the original Shangra-La, located somewhere on Jomollhari, the world’s highest unclimbed peak.

Rye’s task will be part of a team climbing Jomollhari and locating the stones.

Accepting anything that may for even a short time make him forget Hannah’s last moments, Rye agrees to join Rask’s expedition, but he has no idea what he’s getting into.

Fighting a man who apparently can’t die, though Rye himself kills him at least once, meeting a woman who knows all about him but herself may not be quite human, and finally arriving at the edge of the world where the forbidden mountains hold the secret they seek, Rye discovers the secret is more than anyone believes, an arcane trust guarded through the centuries, originating from a truly unexpected source.

“He couldn’t say why, but crossing certain terraces as they made their way to the temple had his skin prickling. More than once a chill to the stale air made his flesh creep, but every time he turned back, there was no one to be seen.

“I’m not going crazy, am I?” he whispered to Carter as they traversed a narrow spam of a stone footbridge. “We are being watched, aren’t we?”

“This place is off,” Cartger agreed. “There’s something weird about it. Weirder than just being lost city weird.”

The “ghosts under the mountain,” rumored to protect the peak, not only exist but are much more dangerous than anyone could’ve believed. In the snow-filled chambers of a city within the mountain, amid a crypt of frozen bodies in SS uniforms, Rye will find his true destiny, waiting through the centuries for only him.

Though this novel begins as a fairly routine thriller—even with the emotion-ridden first scenes of the mall shooting and Rye’s devastating audio witnessing of his wife’s death—it quickly transforms into a formidable action adventure with supernatural overtones.

Rye at first attends recklessly, wanting to forget, not caring how he does it or what happens to him, but as he comes to know his fellow searchers, his goal changes, aligning with theirs, to find the cintamani stones Rask wants, and perhaps receive at last a respite from his pain.

In the descriptions of the mountains and the scaling of Jomollhari, some readers may find a similarity to Ronald Malfi’s The Ascent, though that novel is more a story of survival, having none of the world-shattering consequences White Peak holds.

A tale of a discovery no one expected, chilling not only because of its location, but because of the consequences it may hold for the world in general, White Peak will hold the reader in its grasp long after the novel is finished.