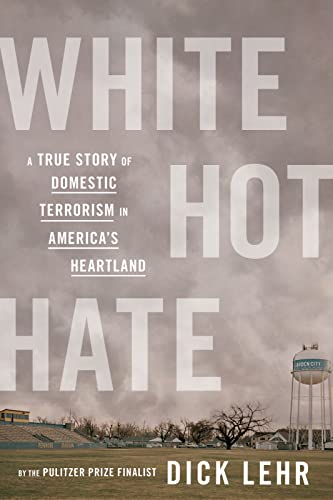 “White Hot Hate is nothing less than a riveting case study of hatred of the Other. It is revealing, beautifully crafted, and an important (and horrifying) tale of our American moment.”

In the mid-1990s, thousands of Somali Muslims, fleeing strife in their homeland, began arriving in the tiny Kansas town of Garden City, one of America’s most rural places. The immigrants came for jobs in area meat-packing plants and a chance for new lives. They lived quietly, in isolation from townspeople.

“I feel like I belong here,” said one Somali man. “Muslim—not Muslim—it doesn’t matter. We are all the same.”

The city’s population had once been more than 82 percent white. Soon, it had a foreign-born majority.

That did not sit well with members of a local right-wing militia group. In the spring of 2016, they conspired to bomb an apartment building and a mosque, as recounted in veteran journalist Dick Lehr’s remarkable White Hot Hate, which takes us deep behind the headlines of a domestic terrorist plot prevented by the FBI.

Lehr, formerly a Boston Globe reporter, who now teaches journalism at Boston University, excels here in several respects. First, he draws a vivid picture of life in Garden City, where most people farm and the Somali newcomers lived in the same apartment buildings and shop for groceries in Somali businessman Adan Keynan’s African Shop, where elders often gathered in a back room to socialize.

“Longtime residents recognized that the newcomers were hardworking and largely kept to themselves,” writes the author. Anthropologists came to study the exploding meatpacking industry, the immigrant population, and the city’s “quiet accommodation of its foreign newcomers.”

Second, Lehr offers an intimate view of Dan Day, an out-of-work probation officer, who supported his family by buying and selling goods online, who agreed to become an FBI informant when invited to join a local paramilitary group. It was “just the right thing to do,” Day reasoned. He was alarmed by the anti-Muslim rage of militia members: “Muslims are like cockroaches . . . You have to kill all of them,” one remarked.

Lehr draws on sworn testimony, court documents, secretly recorded conversations, and interviews to chronicle Day’s penetration of the group. The informant carefully avoided initiating actions, which would have constituted entrapment. Instead, as coached by the FBI, he simply reacted to what he heard and observed.

A decent man who had never had a complaint about foreigners, Day forced himself to act “as if he hated Muslims as much as others did.” When one conspirator says he would like to kill “a couple of fucking ragheaded bitches” walking by, Day tells him to “chill.”

Calling themselves the “Crusaders,” the militiamen were convinced that the Somalis would lead them “to something ISIS-related—possibly a camp or a supply depot.” The belief was absurd, fostered by an Internet-enabled “network of paranoia and doomsday ideology,” writes the author. At the same time, presidential candidate Donald Trump’s anti-Muslim rhetoric was reaching new heights.

The conspirators “embraced the Internet as a source of authentic, credible information, as if it were a public library,” says Lehr. “They seemed oblivious to the false claims and bogus websites that proliferated online. They routinely shared posts and ‘news’ from right-wing media and militia sites that at once united them with likeminded ‘patriots’ and corroborated their belief that everyone should be ‘prepping’ for when the SHTF (Shit Hits the Fan).”

More than once, the reader must remind himself that these were ordinary, if bigoted, white Kansans deluding themselves about the supposed intentions of strange-seeming immigrants with whom they never interacted.

In this third way, Lehr succeeds in showing how these right-wing Kansans whipped themselves up with “white hot hate” and concocted their plot. They kept the Somalis under surveillance (they “had to be up to something nefarious”), eventually gathering bomb-making materials (including readily available fertilizer), recipes for improvised explosive devices, and other information with the intent of destroying the newcomers’ mosque and apartments. They had even drawn up an anti-Muslim manifesto.

All the while, they agreed the real problem was that “fuckin’ nigger in the White House,” writes Lehr.

Day, who had won the trust of militia leaders, kept the FBI informed each step of the way, with reports on the group’s discussions and taped recordings.

Once in custody, militia leader Patrick Stein insisted to the FBI: “I’m a patriot, bro. . . . I’m a fucking Christian.” After a six-week trial, he and others were found guilty of “conspiring to use a weapon of mass destruction against Somali immigrants in Garden City, Kansas.” Each was sentenced to more than 20 years in prison.

White Hot Hate is nothing less than a riveting case study of hatred of the Other. It is revealing, beautifully crafted, and an important (and horrifying) tale of our American moment.