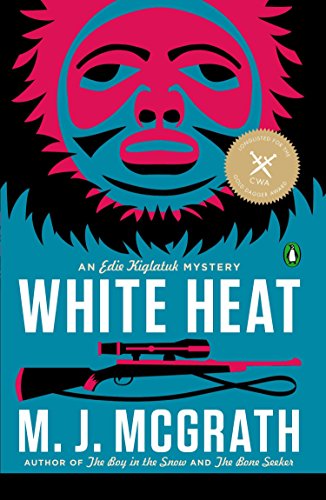 “. . . a gripping crime novel in which the main character never runs (sweating leads to hypothermia), chews fermented walrus gut, and builds an emergency snowhouse with the right kind of three-layered snow in a matter of hours. . . . [a] deft story of family loyalty and clashing cultures regains its rhythm, charging forward to an unexpected, satisfying, and chilling conclusion.”

People are fascinated by extremes. The biggest ocean liner. The fastest runner. The highest mountain. The most expensive, the newest, the oldest. In White Heat, debut novelist M. J. McGrath takes readers to the coldest, northernmost inhabited location on the planet: Ellesmere Island in the Canadian High Arctic, where winter temperatures regularly plummet to –50C, and the sun remains absent 24 hours a day a full four months of the year.

Ms. McGrath writes about the Arctic with authority. An award-winning journalist, she is also the author of The Long Exile: A Tale of Inuit Betrayal, a nonfiction work which tells how, in 1953, the Canadian government forcibly relocated three dozen Inuit from their flourishing home on the Hudson Bay to the barren, High Arctic desert of Ellesmere Island.

Set in a landscape more immense than most of us can imagine, White Heat is an intimate story which features the descendants of these intrepid survivors; a gripping crime novel in which the main character never runs (sweating leads to hypothermia), chews fermented walrus gut, and builds an emergency snowhouse with the right kind of three-layered snow in a matter of hours.

Edie Kiglatuk is a half-Inuit, half-white ex-polar bear hunter turned hunting guide who lives in a wooden house with electricity and running water, drives a “snowbie” and a dogsled with equal skill, and watches Buster Keaton and Harold Lloyd movies on her DVD player while enjoying her favorite supper of maktaq, “thick, chewy whale skin underscored with a layer of creamy, slightly sour fat,” and sea urchins—even though she’s well aware that Arctic settlements have been warned off marine mammal fat because of PCBs.

She brings a frozen seal carcass and two hunting knives to her classroom so her students can learn the English words for “blubber” “spleen” and “flense” while they butcher it, then heads to the settlement store to purchase a package of Saran Wrap so she can package the chopped seal before it thaws and becomes difficult to handle.

But Edie is no Arctic Superwoman. She’s a struggling alcoholic. She’s divorced. Her ex-husband’s new girlfriend hates her. And because she’s a woman, Edie gets only grudging respect from the Autisaq elders who assign out the occasional guiding jobs in her isolated community.

Thus when one of her clients is murdered while Edie is guiding them on a duck-hunting expedition to Craig Island, her precarious livelihood is threatened. Edie is granted a reprieve when the elders label the incident an accident. In a community that prizes independence, they worry that a murder case will attract unwanted attention. Everyone tells Edie to let it go.

But Edie knows the hunter didn’t shoot himself. Defying the growing antagonism of her community while wrestling with her own demons, Edie embarks on a quest for truth which takes her through a frigid land of rock and ice in which there is both everywhere and nowhere to hide.

The novel falters slightly when Ms. McGrath sends Edie across Smith Sound to Greenland as part of her quest, where Edie’s dogged determination involves her in a series of spy thriller-esque escapades that strain credulity. It’s as if three-quarters of the way through the novel, the author suddenly worried that the intimate setting of Ellesmere Island wasn’t enough to hold the reader’s attention, and she needed to broaden the novel’s political, environmental, and geographic scope.

Ms. McGrath need not have worried. While Edie as fish out of water is not nearly as compelling as Edie Kiglatuk, Inuit hunter and guide, when the trail of truth leads Edie back to Autisaq and Craig Island, this deft story of family loyalty and clashing cultures regains its rhythm, charging forward to an unexpected, satisfying, and chilling conclusion.