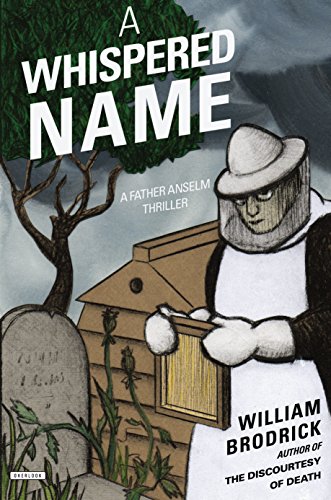 To say that A Whispered Name is simply a mystery/thriller would be an understatement. Author William Brodrick has written a complex story with a wide range of intricate situations woven together.

While Father Anselm, the protagonist, is doing the simple task of tending to his bees, he encounters a woman and an older man in search for Father Herbert Moore, a monk who died several years earlier.

When asked why they seek him, the answer is vague, mysterious, and sets Father Anselm on a journey that takes him back to the First World War in search for answers that have been buried with Father Herbert and were perhaps never intended to be found.

The woman, Kate Seymour, informs Anselm that she is seeking answers about the court martial of Joseph Flanagan—a court martial that Father Herbert sat on during World War I, prior to becoming a monk.

Kate comments that “This was no ordinary trial . . . It had a meaning . . .” and with that cryptic remark, Kate and the elderly man do not remain, but leave Anselm with a worrisome task: to determine what the court martial was about and how Father Herbert became involved.

And so the story begins its long, winding path to resolution for Father Herbert, Father Anselm, and a cadre of characters—most of whom are nothing but a memory. There are stolen identities and misplaced people, all of which need to be sorted out as Anselm pieces together this jigsaw puzzle of the injustice of one particular event.

Brodrick takes the reader back and forth through time as Anselm learns about The Great War through his research of military rules and how these rules affect every soldier, every family member, every officer, and even the church: “Anselm . . . brought some structure to his research which gave an interpretation to the court martial. External factors crowd around the Flanagan file—political events in Ireland, the Ypres campaign, mutiny, eugenics, racism, . . .”

Through his research, Anselm encounters numerous characters who are also anxious to learn the facts of Joseph Flanagan’s court martial and bring this event to a close.

The story wanders through a variety of points of view as the truth of the court martial unfolds, while at the same time forcing Herbert to face his own failings. These conflicts and movements through time is often convoluted. While it provides considerable information about the process of court martial in the British army, and this court martial in particular, it is nonetheless at times confusing.

What is not confusing is Brodrick’s command of the language—his skill as a wordsmith is exceptional. His scenes set during the war paint pictures of the pain and chaos experienced by those who participated at all levels:

“Moore woke on the slope of a shell hole. He’d hardly felt the blast… It had been early morning when the coal-box had whistled toward them . . . He was alone on the edge of a black pool with oily swirls of red and green . . . Explosions thundered continuously, masking their personality . . . Herbert slid through a sludge of intestines and grit, hauling himself into the open.”

Brodrick also captures Herbert’s feelings about sitting in judgment of Flanagan, as depicted in this scene from the court martial:

“Far off the guns boomed and clacked. In that strange quiet captured by the classroom without children, Herbert understood that Flanagan was windy—Herbert knew the feeling; it was awful; you never got used to it—but he’d taken a grip on his terror: it was a decision. Flanagan was smiling at an open grave. Herbert could just make out the whisper of air being drawn and pushed through his teeth.”

The confusion of bouncing back and forth through time eventually brings the reader back to the present where Father Anselm tidies up the information and as with all mysteries, the proffered clues and the revealed responses filter through the funnel of discovery, giving answers to questions while sorting out fact from fiction.

As the story winds down and at a gathering of the interested parties, one of the characters sums up the entire event with the simplicity of: “This is the story of an Irishman who saved an English boy from the British Army.” Anselm takes this a step further and as promised by Kate Seymour, divulges to those present why “This was no ordinary trial . . . It had a meaning . . .”

Putting aside the sometimes confusing march through time, this is a good read, especially to enjoy Brodrick’s use of words that so visibly describe settings and get into characters’ minds. The reader will ride through the story on the shoulder of each character, and that makes this a fascinating read.