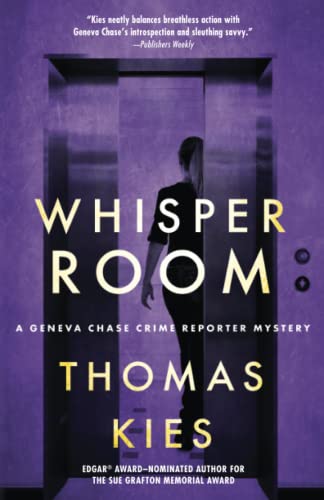 “Again, Thomas Kies does not disappoint!”

Who doesn't like a nice, juicy scandal especially when it involves a vain, egotistical, self-centered SOB?

Local TV pretty boy news anchor Elliott Carlson is barricaded in his house holding his wife hostage at gunpoint. Someone has posted a video of Carlson having sex with a 15 year old from Whisper Room, an online escort service. His wife had been watching it all on a video she'd received on her cell phone just before Elliott arrived home from work. The ensuing argument led to a 911 call followed by a media blitz.

Crime reporter (and amateur sleuth) Geneva Chase is on the scene of the standoff, elbowing her way through a crowd of TV crews and looky-loos to get as close as possible to the center of the action on this usually quiet country road. It's a story readers will love.

After Elliott is taken away in handcuffs, Geneva finds out from her former lover Chief of Police Mike Dillon that someone was blackmailing Carlson over the encounter with the escort, and when Carlson didn't pay up they released the video. The questions facing both Geneva and police investigators now are: Who is the blackmailer? And who is the fifteen year old in the video?

There are advantages to being an amateur sleuth, in fiction, anyway. (In real life, they're called citizen sleuths.) Freed from a militaristic command structure, they don't report to or take direction from a superior, and they don't always follow the rules. Like if a witness says they don't want to talk without a lawyer, amateur sleuths just keep on asking questions. And though it's illegal to enter a premises without permission, in fiction they usually ignore those pesky search warrants.

As for Geneva, she finds it beneficial to get information about a case by telling harmless fibs. Okay, little white lies. Okay, doozies. She's quick on her feet when it comes to that if she sees that deception will move her investigation forward.

In this scene she's scoping out the residence of a murder victim. A neighbor approaches:

"'Why are you looking for Mindy?'

"He was wearing a dark green sweater, jeans, and house slippers. His dark hair was turning silver around his temples, and his large hand was dry as it gripped mine.

"I pulled a card out of my bag and handed it to him. 'I'm a research analyst . . . Mindy is part of a survey I'm doing on the hospitality business.'"

A total lie, but she often gains access to evidence and information about a crime before police investigators do. And she's not above withholding such information—only temporarily—from them if it doesn't harm the case.

After the standoff, Geneva hears from Elliott Carlson's wife Michelle. Michelle wants to set the record straight about what actually set off the events of the previous night. Can Geneva come over and interview her for an article?

At first glimpse of the Carlson residence, Geneva wonders if a local news anchor makes that kind of money:

"At over thirty-five hundred square feet, it boasted three bedrooms, three bathrooms, two home offices, and a workout room. According to one real estate website, the home was worth slightly over a million dollars. . . .

"The massive two-story colonial had a brick façade and plenty of windows. I tried to guess from which window Mrs. Carlson had thrown Elliot's things."

Upon arrival, Elliott's wife is packing up the rest of her husband's belongings. She tells Geneva:

There are a lot of characters in this book and readers will see each and every one of them thanks to the author's talent for succinct and on point visual descriptions.

Some of the characters are carryovers from previous books in the series, and author Kies does a fine job of re-introducing them so new readers understand their relationship to each other and to Geneva Chase without lengthy repetitive narratives.

". . . In her thirties, tall, Black, athletic, with fierce brown eyes, full lips, sculpted cheekbones, she moved with the grace of a predatory cat.

Part of the pleasure of reading a Thomas Kies book is meeting the author's fictional characters.

Again, Thomas Kies does not disappoint!