Whisper Down the Lane: A Novel 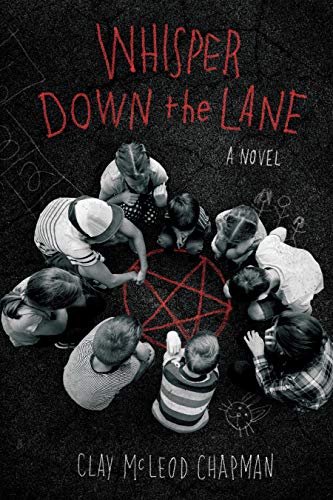 “Chapman writes in an unadorned manner and with a sharp eye toward the underside of American popular culture. This is a novel sure to please those who love horror and mysteries, plus it is a nice mixture of classic and modern thrillers.”

Richard Crenshaw’s life is the perfect crystallization of “damned if you do, damned if you don’t.” This theme runs throughout author Clay McLeod Chapman’s latest novel, Whisper Down the Lane. Set in a small Virginia town in both 1983 and 2013, the book’s themes are as dark as they are eternal: secrets have power and can destroy lives when those lies are swallowed whole.

Richard Crenshaw was once a boy named Sean. Although poor and raised by a hardworking single mother, Sean earned a scholarship to an elite private school in Greenfield, Virginia. Sean’s mother keeps working hard to put food on the table and pay bills, while Sean, for a time, enjoys school. Then rumors start to circle in the town. It is 1983, and the “Satanic panic” of the 1980s is under way. Local churchgoers in the town are convinced that there are millions of Satanists spread throughout the United States, even including in Greenfield. Several students come forward to accuse elementary school teacher Mr. Woodhouse of teaching his students Satanic chants and encouraging them to participate in nude “games” in the classroom. Sean becomes the center of these accusations, as he names six teachers and tells the general public that the “Greenfield Six” forced their students to watch midnight orgies in a local graveyard and consume the flesh of a dead boy.

This testimony becomes national news in 1983. Sean and his mother earn accolades for their bravery. The problem was that none of it was true—Sean was pressured into concocting a false story by the town, his mother, and a brutish therapist named Dr. Kinderman. Although Woodhouse is acquitted, he commits suicide at age 36. His legacy is only the most obvious victim of Sean’s lies.

Thirty years later, Sean, now himself 36, has legally changed his name to Richard. He is an art teacher in Greenfield, and he seems content with his wife Tamara and her son, Elijah. Then things start to happen: a rabbit is butchered in a Satanic manner on the school’s grounds, a family’s dog is eviscerated, and somebody breaks into Richard’s classroom and leaves behind a red pentagram and votive candles. Things come full circle for Richard when one of his students, Sandy, accuses him of physical and sexual abuse.

Whisper Down the Lane is a psychological thriller about shapes, especially pentagrams (obviously) and full circles (the circular nature of Richard/Sean and his life choices mirroring his victim, Mr. Woodhouse). It is also about the Satanic panic that gripped the United States in the 1980s, plus there is more than a hint of the contemporary given our culture’s own obsession with pedophilia and secret pedophile rings.

One of the more difficult aspects of Whisper Down the Lane is its use of an unreliable narrator. Richard/Sean is a self-confessed liar. Also, during the second half of the novel, he sinks into the morass of insanity. Is Richard/Sean the true killer all along, or are Satanists really running Greenfield? These questions are answered, but there is enough doubt left behind to make even the most self-assured reader question everything. Another issue is the inclusion of Sandy and her mother, who have very visceral connections to Richard/Sean and have every reason to want to hurt him.

Whisper Down the Lane is a well-crafted thriller with an intricate plot. Chapman writes in an unadorned manner and with a sharp eye toward the underside of American popular culture. This is a novel sure to please those who love horror and mysteries, plus it is a nice mixture of classic and modern thrillers.