When You See Me: A Novel 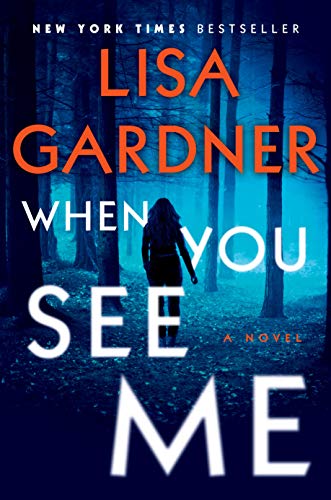 “looks, especially exteriors, can often be deceiving, as this FBI team soon finds out.”

When the skeleton of a girl who disappeared 15 years ago is discovered in a grave in the north Georgia mountains, the FBI sends agent Kimberly Quincy to investigate. Brought in as part of her team are DD Warren, Flora Dane, and Keith Edgar.

Warren is a Boston homicide detective who “suffers no fools and takes no prisoners.”

Flora Dane is a survivor, abducted and held prisoner for over a year by serial killer Jacob Ness. This newly-found body may be another Ness victim. Flora hopes it will give her more information on Ness and perhaps some closure for herself.

Keith Edgar is a computer analyst and true-crime enthusiast. He’s included because of his computer skills as well as the fact that he’s in love with Flora who as yet is friendly but unresponsive.

Flora’s assessment of Keith: “Charming, endearing, and smart. I don’t know what to do with a man like Keith.”

Keith’s assessment of Flora: “You’re beautiful anywhere you go, in anything you wear.”

Obviously, the man is in love, and that love will be tested in this case.

Niche, Georgia, where the body was discovered in in the scenic mountains, is a “quaint little community exiting to house and feed hikers doing the Appalachian Trail.” It’s nearest “big city” is Dahlonega which really isn’t much bigger. Everyone knows everyone, as well as their secrets.

It isn’t long before more bodies are found, all in shallow graves, some holding several sets of skeletal remains. As the corpse count grows, so do the suspicions that the inhabitants of Niche know more than they’re saying.

DD notices in particular one employee of a local B&B run by the mayor and his wife. Supposedly their niece, the girl is mute, as well as illiterate, and apparently has no name. She can communicate by drawing, and the illustrations she gives DD tell a terrible story.

“A huge shadowy figure that looked as wide as a cement truck and as tall as a grizzly bear. A demon. Something less man, more beast.”

Before the case is over, a sinister conspiracy will be uncovered in Niche unlike none the team has ever faced, more terrible than anything Jacob Ness has ever perpetrated.

Those having ever visited Dahlonega know what a quiet place it is, located in the beauty of the north Georgia mountains. From that fact, fictional Niche might be considered the same, but looks, especially exteriors, can often be deceiving, as this FBI team soon finds out.

As is becoming unfortunately popular as a means of exposition, part of this novel is told in the first-person present via Flora Dane, serial killer survivor. Various other points of view are also presented, that of DD and Kimberly Quincy as well as the unnamed B&B employee, so the reader gets four female views of events taking place.

There are great characterizations in this story, for both villains and hero(ines). There’s also the novelty of having two of the characters named after real fans of the author, winners of her “Kill a Friend, Main a Buddy Sweepstakes.”

This is a book rich in description, as well as delving into the motives and thoughts of each of the characters, law officials and killers alike, revealing some hidden depths in characters who could’ve been written as cold-blooded criminals. In author Gardner’s deft hands, they also are still lawbreakers but occasionally show moments of concern and surprising compassion.

This novel is the 11th in the series and it doesn’t stint on the tension and suspense for which this author is well known.