When the Truth Unravels 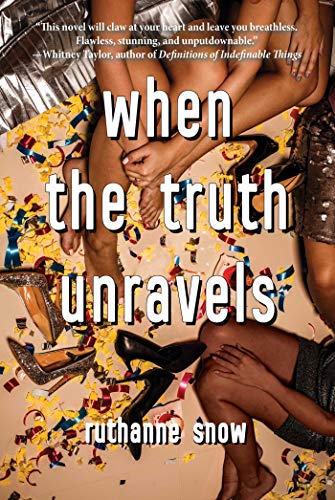 “Snow weaves her way around so many complex issues that teenagers face, and does it with kindness and a sense of love for what teens deal with.”

Four teenage girls, best friends. Four personalities. Four stories. During the past two months, however, their collective story revolves around the suicide attempt of Elin, one of the four. How could that not shape who they have become? Especially since the whole event is a secret the girls have to keep.

“I love Elin Angstrom to death,” Jenna says, “but it pisses me off that she tried to kill herself.” Jenna has been Elin’s best friend since before they could talk. She is, as they say, messed up over it all. “Not too long ago, I had thought I’d never hear Elin laugh again.”

And then there’s Rosie. Divorced, bitter parents. One kind stepdad. A “just friend” who declared his love. A prom she doesn’t want to attend, forced to as part of their friend group to take care of Elin. Is it any wonder she just wants to be left alone? “Eventually Ket and Elin got bored with my party-pooper attitude and left me to return to my book—which worked just fine for me. I loved my friends, but I didn’t love that they were always trying to cheer me up.”

Elin, home now from the hospital, is still trying to pick up the pieces. Her friends are struggling, her ex-boyfriend is still on her mind, and her parents are scared to let her do anything. But she had one night she held out as a beacon of hope. “And prom. Always prom. That would put her life back together.”

The story all takes place in one night: the girls’ senior prom. So much is woven into this story about friendship, love, and understanding. Relationships are fragile. Lies seem to work, but eventually crush them. Sadness and depression get a hold and don’t want to let go.

When the Truth Unravels is told in a way that pulls you in from the four perspectives. Each girl comes to life on the page, on her own path through the maze that is this particular prom night. Snow weaves her way around so many complex issues that teenagers face, and does it with kindness and a sense of love for what teens deal with.

Highly recommended for teens, parents, and anyone who wants a glimpse into the lives of young people and some of the frightening and complicated issues they face.