When Reagan Sent In the Marines: The Invasion of Lebanon 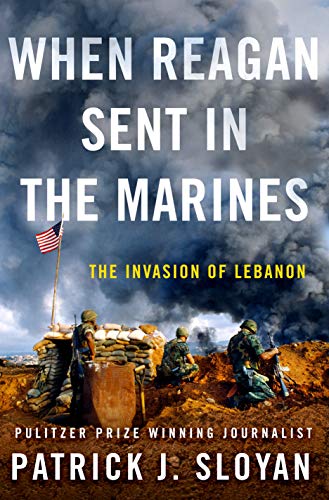 From the beginning of When Reagan Sent in the Marines, Pulitzer Prize-winning journalist Patrick J. Slogan makes no secret of his views. The author argues that the attack on United States Marines in Beirut, Lebanon, on October 13, 1983, came about because President Ronald Reagan, "surrounded by conflict, ignorance, and incompetence," "had neither the background or the foresight to recognize the river of blood" that a American Israeli invasion of Lebanon "would unleash."

Secretary of State Alexander Haig and Israeli leadership "sucked the unwitting Reagan into a confrontation with ferocious and relentless opponents who conducted diplomacy with knives and bombs." "It ended in defeat and blood-spattered humiliation for both Israel and the United States." The Jewish state appeared as a bloody imperialist invader that supported atrocities and the terrorists who commit them.

"Bumbling diplomats could trigger a ground war with fast fading public support." No reason remained for "extending the stay of the multinational defense force of American, French, and Italian" troops. The Marines constantly took casualties in "attacks [that] showed ineffective protection." A bombing of the American embassy in Beirut on April 18 killed 63 people including 17 Americans.

Conditions worsened, however, resulting in the deaths of 241 Americans and 58 French people on October 13, 1983. Reagan would be "haunted by his refusal to withdraw the same Marines to shipboard safety eight days before the attack."

Many reasons exist for remembering this incident besides lessons brought out by the recent negative revisionism of the history of the Reagan administration that includes many such missteps. Statements appear in print that terrorists always fail to achieve their goals. The attack of October 13, and many to the present day, prove otherwise.

"Reagan was a victim of policies of his predecessors and events he understood vaguely if at all." Haig manipulated the president by selling the invasion of Lebanon as a blow against the Communist Soviet Union through its ally Syria. The consequences could have become a new Israeli Syrian war or much worse.

"For the next 19 years after the siege, the United States would suffer the consequences of Islam's revenge." "At least two US presidents went down to defeat caused in part by crushing inflation and double-digit interest rates" brought on by related Middle East oil crises.

Sloyan in this part memoir and the rest personal historical account, begins his history with a battlefield level accounting of Israel's near defeat in the Yom Kippur War. The failure of American and Israeli intelligence led to diplomatic mistakes that threatened global war. Secretary of State Henry Kissinger, "his department, and the government of the United States were all badly out of touch."

Long before, Lebanon had become a "vain fantasy" of Israeli leadership of making it a Christian ally of the Jewish state by interfering in Lebanon's civil war. "Most experts on the Middle East perceived the Israeli plan to be not only too ambitious and risky but also downright delusional, more cockamamie than credible."

When Reagan Sent in the Marines covers much ground including the success of American electric wonder weapons and the Reagan administration, such as its Grenada campaign. Slogan particularly emphasizes the misunderstood situation with Egyptian President Anwar Sadat. Eventually assassinated for his efforts at conciliation with Israel, Sadat also earned the Nobel Peace Prize.

Sloyan's narrative is enlightening, fast moving, and timely, if disjointed at times, and has biases typical of someone analyzing events as he witnessed them happening. The book has annotations, bibliography, and illustrations.