When I Arrived at the Castle 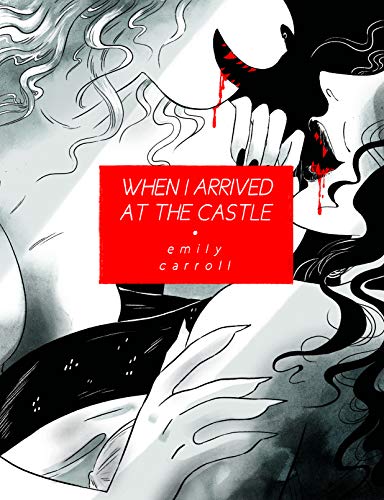 “When I Arrived at the Castle is the perfect horror story for a rainy day or some night shrouded in fog.”

Told in the black, white, and crimson hues of her well-praised previous effort, Through the Woods, writer and artist Emily Carroll’s When I Arrived at the Castle is a captivating and deeply gothic fairy tale with more than a healthy dash of surrealism.

The main characters in this brief, but lush graphic novel are the vampire countess and the lion girl that shows up at the vampire’s abode in order to kill her. The girl’s plan goes awry thanks to the manipulations of the countess, who uses the power of stories, nightmares, and her own sensuality to lull the young beast into a state of inaction. Sex and death really do comingle here.

When I Arrived at the Castle is more about emotion, images, and ambiance than storytelling. While one reviewer has called it a cross between Alice in Wonderland and Dracula, this is not quite right. Rather, When I Arrived at the Castle has the same mood and feeling as Carl Dreyer’s 1932 film, Vampyr. Both Carroll and Dreyer’s undead tales are nonsensical and nonlinear, but also menacing and have the ability to linger long in the heads of anyone exposed to them.

The best scene in this graphic novel occurs when the countess brings her enchanted slayer to a room full of blood red doors. After telling the girl to “Choose one,” When I Arrived at the Castle begins telling stories within stories, many of which hint at the idea that the girl and her friends have tried to stake the countess before (and have failed). These moments are akin to a character stopping to remember Hansel and Greta while being chased by one of those masked horror movie villains with the usual love of sharp kitchen implements.

The visual standout of this graphic novel sees the ad-hoc voyeur watching the countess freshen up through a keyhole. Carroll lets the movements of the seductive countess do all the work in these silent sequences, and when the vampire proves to be something even more evil, readers will mirror the shock of the protagonist.

When I Arrived at the Castle is a blood-drenched romance and a cartoon gothic opera. Yes, in regard to storytelling, there are glaring deficiencies here. It is hard to figure out what the whole point here is, plus the final sequences, which see the young girl turning into a fearsome lion, are bizarre. However, When I Arrived at the Castle proves that plot is not everything. Haunting images and suggestion can be plenty effective so long as the storyteller and artist is a genius. That appellation definitely fits Ms. Carroll.

When I Arrived at the Castle is the perfect horror story for a rainy day or some night shrouded in fog.